It’s 11:00pm. I’ve just come home from watching Downton Abbey at a friend’s house and even though I’ve just called out to PIC, there is no answer.

“Is everything okay?” I take off my hat and gloves and hang my coat before making my way to the back of the kitchen.

That is when I see him.

He is hunched over a book, and he is all but cursing under his breath.

“Ask me again in five minutes,” he stammers, and as my eyes adjust to the light, allowing me to take in the pile of dirty dishes, the bits of spinach all over my counter, the pans and pans of runny eggs in my oven and the discarded blender near the dish drain, I begin to understand.

There has been a Vitamix disaster. 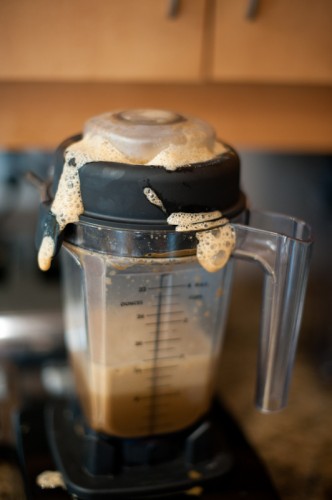 Not quite as planned…

He bought the Vitamix at the Home Show this past winter.

We had been standing at the booth for about 20 minutes (PIC, me and my mom, who loves her Vitamix more than life itself), sampling tortilla soups, green smoothies, strawberry ice creams and frozen cappuccinos all made in a single machine and he decided to buy one, right then and there.

Who knew smoothie shows could be so memorizing?

I was a bit shocked, although I shouldn’t have been. He’s makes a good living and he likes gadgets (he bought me a top of the line Kuerig for Christmas, in addition to the eco-friendly refillable canister). He also likes to eat healthy and when my mother told him he could use the Vitamix to make kale smoothies, it pretty much sealed the deal.

And so, on that fateful Sunday evening back in the days before we lived together, he brought the Vitamix to my house and decided to give it a go.

“I won’t have time to buy groceries for our eggs before I go to watch Downton,” I apologized. (We’d gotten in a routine of making a dozen super healthy vegetable filled mini-frittatas on Sunday evenings, which we then ate for breakfast throughout the week.)

So I headed off to watch Downton, leaving him alone in my kitchen. 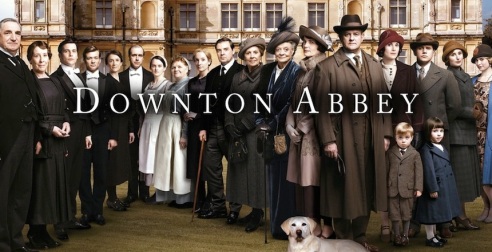 Carson would never allow a Vitamix into the Abbey.

A brief aside before we proceed:

This past Christmas, I offered to make Christmas Eve dinner. Everything was going along swimmingly (the appetizers, the sides, the salad, the dessert) aside from one minor problem: I hadn’t defrosted the ham.

I caved to the pressures of getting everything perfect for Christmas and completely lost it. (There may or may not have been tears.) PIC just folded me into his arms and told me it would all be fine; it was just ham; it would get done eventually and we had plenty of wonderful food to tide us over in the meantime.

He didn’t let on but I’m pretty sure he was trying not to laugh the whole time.

(And who could blame him? It was a f*cking ham. Not a freaking Haitian refugee crisis for crying out loud.)

Now, on the night of the Vitamix Disaster, I’m the one folding him into my arms; I’m the one telling him it’s just a batch of eggs; I’m the one trying not to laugh at his earnest but ill-fated attempt.

“But the eggs aren’t done.”

I peer into the over and sure enough every muffin tin I own is brimming with a strange green liquid. I suspect (but don’t say) that these eggs will never be done, and my suspicions are confirmed when I see that each of the mini frittatas is floating. In water.

“Did you use frozen vegetables?”

I’m no Vitamix expert but it occurs to me that perhaps he used frozen, freezer burned vegetables and that they were somehow ensconced in a block of ice.

“Frozen vegetables? No. Why?”

“Well… the eggs are… floating.”

“The manual said to. I couldn’t find anything about making frittatas so I just went with the chapter on how to chop hard boiled eggs. And it said to add water.”

If only we were so lucky.

4 Responses to “Of Green Eggs and Ham: The Vitamix Disaster”