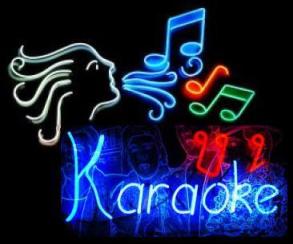 This is a problem because we’re going on a cruise next month.  Cruises have karaoke and not only is The Wedding Date planning to sing but he wants me to sing with him.

Allow me to shed some light onto my illustrious musical career thus far:

Grace Lutheran Church, circa 1997: I joined the church choir with my mother, only to discover that I was an alto, not a soprano as I’d previously hoped.  Thanks to my inability to read music, however, and the fact that there were only two altos in the entire choir, I always had to stand next to one of the sopranos and was forever drifting into singing the melody by mistake.

Freehold Music Center, circa 1999: I auditioned for my first musical and was cast as one of Cinderella’s step sisters in a community theater production of Into the Woods.  Voice lessons soon followed and when my teacher told me I had a “natural vibrato” I assumed that I’d be making my Broadway debut in no time.  We took a break for the summer, however, and when I called her in the fall to schedule my next round of lessons, she never called me back.  I was that hopeless.

Goucher College, circa 2004: Recognizing that my musical talent lay perhaps in the realm of scholarship and not performance, I decided to enroll in a baroque music course.  It was cross listed within the history department but the first day of class the professor announced that since the class contained mostly music majors, he’d be gearing the class towards them (as opposed to us infiltrators from the history department).  I was doing alright until he started throwing terms around like “major” and “minor key.”

With the midterm just a few weeks away, I raised my hand and asked him to explain.  His explanation, however, involved more terms I didn’t understand—so many, in fact, that I could feel my eyes welling up with tears.  Finally, he took pity on me and said, “You know how some music sounds happy and some makes you want to kill yourself?”  I nodded.  “Well that’s the difference: major key sounds happy, minor key makes you want to kill yourself.”

Goucher College, circa 2006: I finally got around to registering for “Music for Dancers,” a requisite course for all dance majors actually intending to graduate.  Towards the end of the semester, we all had to take turns playing on a drum set.  I was so nervous that I couldn’t stop laughing, swallowed my gum and nearly choked to death in front of the entire class.

Clearly music is not my forte.  And karaoke… well, as I’m always telling my students, there’s a reason I’m a dance teacher and not a vocal coach.

And yet The Wedding Date will not be deterred.  (“It’ll be fun!” “You’re never going to see these people again in your life!” “I’ll buy you drinks!”)

The only problem now is that we have to come up with a duet I can actually sing.  So far, we’ve got Paradise By the Dashboard Light, Don’t You Want Me Baby and Love Shack but I’m not 100% sold on any of these.  So… any suggestions?

23 Responses to “And Now He Wants Me to SING with Him?”