Most women, upon finding themselves alone in their boyfriend’s house for the afternoon, would take advantage of the opportunity to snoop.  But not me: I’m rearranging furniture.  And drinking tea in the living room, and walking around the house with my shoes on instead neatly piled next to the front door but what can I say?

And I’ve decided that his children need a bit of free spiritedness in their lives too, so I’ve taken it upon myself to become the Maria to their father’s Captain Von Trapp, starting with the patio furniture.

The Wedding Date has an adorable little patio off of his living room.  It’s nothing fancy—just a little alcove beneath a green wooden roof and a rickety glass-topped table surrounded by shrubs and shade-giving trees—but it’s been calling to me since my first visit back in November.

This morning, a few hours after The Wedding Date and his kids left for a three-day gaming convention in North Jersey, it said, “Kat… please come out and play!  You can bring your laptop, and some sangria and pretend you’re in Europe” and since I basically loathe the sprawling suburbs in which The Wedding Date lives, I decided to give it a try.

First, however, I had to do deadly battle with the table.

Judging by the amount of dust and grime and foliage piled on top—and the fact that The Wedding Date is usually quite fastidious when it comes to cleaning—I surmised that the poor little glass-topped table hadn’t been used in years.  Years!  And the man has two children who love to play board games!  So I rooted around in the various hall closets until I found a broom and then moved on to paper towels and a spray bottle once the worst of the debris was gone.

I thought about tackling the chairs—four spindly, plastic deck chairs—but a cursory glance revealed that they were beyond the cleaning powers of even the most devoted of Julie Andrews characters, plus The Wedding Date and I haven’t had much luck with chairs lately so I elected to remove a clean, wooden one from the dining room table instead.

The result— although not exactly a balcony in Paris— has been nothing short of fabulous.  And the minute the gang returns from their gaming convention, I’m going to gently urge The Wedding Date to start sending his kids outside to play once in a while.  I’ve already successfully lobbied for later bedtimes and an unplanned stroll along the beach despite the risk of tracking sand into the car so who knows: by the end of the summer, The Wedding Date may have a couple of free spirited little anarchists on his hands running around dressed in curtains and singing “High on the hill was a lonely goatherd… le-o-dil-le-o-dil-le-hee-hoo!” 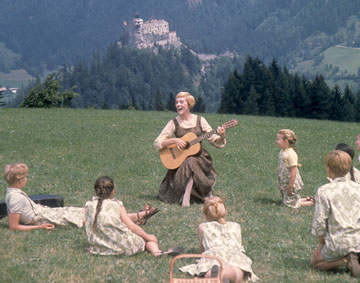 Of course, in all honesty, I’d be happy to settle for a lifting of the no-ice-cream-in-the-living room embargo.