Step 1: Get drunk—not super drunk but at least marginally tipsy and make sure you have a good excuse.  Mine, for example, was the fact that I’d spent the entire weekend shuttling my students around backstage, doling out safety pins and talking them through a variety of competition-related meltdowns.  If all three of my graduating seniors hadn’t burst into tears at one point or another over the weekend, I wouldn’t have felt the need to consume a glass of red wine, two glasses of white sangria and half of my dad’s mojito upon the completion of their final recital.  But they did, so I didn’t have much of a choice.

Step 2: Eat lots of cheesecake, this way when you decided to sit down on your boyfriend’s lap and nestle your head against his shoulder, you weigh a bit more than usual.

Step 3: Be sure that your boyfriend is sitting in a plastic folding chair—the kind that aren’t meant to support more than 200 pounds— this way you can ensure that all evidence of the “accident” is destroyed and eventually thrown away.

Step 5: Let gravity do its thing.

Do you see where I’m going with this?  Unfortunately we didn’t.

As a result, The Wedding Date and I ended up flat on our backs just shortly after the first of the July 4th fireworks had run their course and although he broke my fall, the chair wasn’t quite as obliging.

My attempts at patching him back together were nothing short of pathetic: 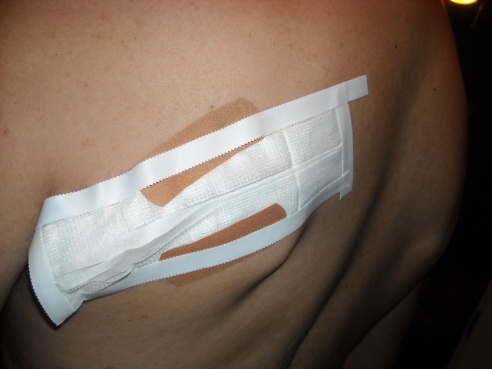 Florence Nightingale I am not…

Then again, I practically had to corner him before he’d let me near his back with anything even resembling an antiseptic.

Fortunately he knows me well enough at this point that he suggested I take a picture “for the blog” as soon as the procedure was over. 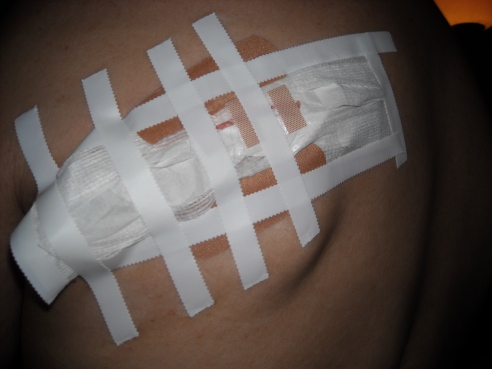