In the sixth grade, which was my last year attending public school, I took dance as my elective. The gym teacher, who was somewhat of a visionary (despite not being properly liscensed to teach in the state and eventually getting fired) devised a rendition of “Time of My Life” from Dirty Dancing for the finale of that year’s holiday concert. She broke our crew into two groups: the good dancers, who would get to dance with a male partner and get to do a lift, and the not-so-good dancers, who would do the section where Patrick Swayze jumps off the stage and does his little sexy dance with the rest of resort staff following behind. 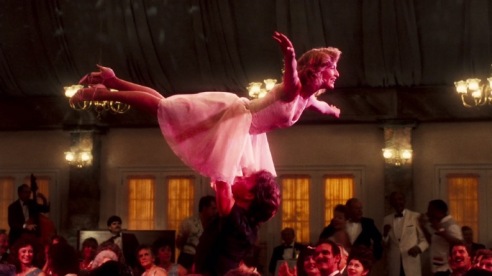 I was deemed one of the “good dancers,” meaning I got a male partner and the chance to do a lift. But among the other good dancers was a seventh grader named Alexis who caught me cutting across the line of traffic when switching between classes once (the school had a rather Draconian counterclockwise traffic pattern for switching classes and it had taken me months to get muster the courage to jump the line like the rest of the upperclassmen) and later threatened to “kick me off the stage” quite literally if I accidentally kicked her again during lift practice.

I was terrified of her. And it wasn’t even my fault. My partner sucked. Everytime we’d get ready ready for our lift (which wasn’t even the iconic Dirty Dancing lift pictured above, but rather a modified version simplified for the intermediate school crowd), he’d swing me around sideways and I’d accidentally kick Alexis and she’d go ballistic and I’d spend the rest of the day worrying that she and the rest of her seventh grade friends were going to jump me in the parking lot.

Very few people got jumped in the parking lot in Freehold Borough but in the fifth grade, a fight had broken out in the cafetorium that landed the elementary  school gym teacher in the hospital with a concussion when she stepped in to break it up; she never fully recovered. So I had seen things.

At any rate, when the time for the holiday concert came around, my parents were in the audience in all their home video glory. They knew about the lift, and they dutifully zoomed in- way the heck in- to capture my ascent into 80s dance film stardom. But my partner dropped me, as usual, and I fell flat on my butt. The only saving grace was that I managed not to kick Alexis on the way down.

I mention all of this today because, oh yeah, I got married on Friday. And I’d decided, in my infinite wisdom, that the best way to add to the stress of planning a wedding while navigating the oh-so-delightful intricacies of orthopedic surgeons, physical therapy, and a frightening number of narcotics while an HMO health insurance plan would be to redeem my sixth grade self on my wedding day.

During our first dance.

To an edited version of our music that we’d never actually practiced to.

While wearing a rather slippery (and backless) bias cut silk gown in which I’d never previously danced. 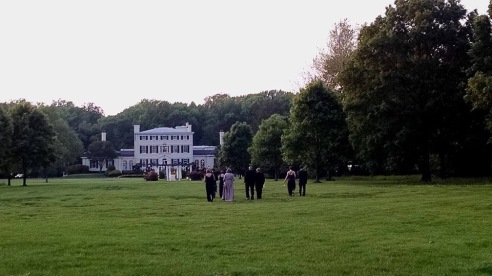 A bit of background before we continue:

I told PIC that the only gift I wanted for Christmas this past year was ballroom dance lessons with him for the wedding. He interpreted this to mean that I would select a studio, and the type of classes I wanted, and sort out the purchasing of said classes and that he’d just fork over his credit card and show up. I, on the other hand, interpreted this to mean that he would do all the legwork, and that I would get to be the one who just got to show up.

By February or March we’d reach an impasse. I was freaking out about my upcoming trip to Iceland, the fact that we hadn’t even booked our honeymoon, and to top it all off, my fiancé wasn’t taking me and my first dance desires seriously when ballroom lessons were the only thing I’d asked him for that Christmas and didn’t he know he was marrying a dance and that the first dance is important?

This led, inevitably, to the requisite “should we call of the wedding?” conversation (except we were both too terrified of the prospect to use the words “call off” and instead tiptoed around the idea of “postponement”); I threw myself on the kitchen floor in front of the fridge, which is where my very best and most dramatic displays of emotion generally take place, and spent a good seven or eight minutes mulling over the fact that there were people coming to the wedding from London and wondering what would happen to them if we called off and/or postponed the wedding.

Fortunately, the seven or eight minutes I spent pondering their fate gave me just enough time to get hold of myself, and to realize that I perhaps needed to be a bit more clear with PIC regarding my desires for our first dance, our honeymoon, and so on and so forth.

He, in turn, stepped up to the plate and purchased a series of classes for us, then won another at a charity auction, and lo and behold, suddenly there we were a few months later, a freshly minted married couple, halfway through our foxtrot, stepping into a promenade position to prepare for the moment of truth…

But you’ll have to wait for the rest until next time because we’re about to land in Venice, people.

17 Responses to “The Case of the Slippery Wedding Dress (and oh yeah, I got married last weekend)”