Apparently I have more to say on the subject of the wedding registry. (Who knew such a benign cultural convention would make for such great literary fodder?)

PIC and I are, if you’re to believe the bridal magazines (which I suppose I should since I’m now writing for some of them and have a piece coming out in Destinations Weddings and Honeymoons soon), very much behind the eight ball when it comes to our wedding registry.

According to one timeline, we should have set ours up in July; this would have been the recommended “ten months before the big day.”

But we weren’t even engaged in July. So we waited until January. (July… January… They both start with letter “J,” right?)

At my mother’s suggestion, we signed up for a Sip-and-Scan event at Macy’s.

This was after a rather disastrous evening of wandering around West Elm, during which I spent the whole time wondering aloud about the sort of people who spend $600 on a Rustin Industrial Storage Coffee Table (granted, it was an amazing coffee table, with the power to solve some of life’s greatest challenges i.e. storing things beneath said table and eating dinner in front of your TV, but still $600?).

PIC, for his part, was simply baffled. (“I thought you liked thrift shops… Why are we even in this place?”) He did take a liking to a pair of fuzzy throw pillows, so we scanned them with our newly downloaded West Elm Wedding Registry App, but when I informed him that the fuzziness came courtesy of a bunch of dead animals (yaks in this particular case), we decided to delete them.

Anyway, fast forward a few months to the Macy’s Sip-and-Scan.

“You’ll like it,” I promised PIC. “There are mocktails.”

“No, mocktails. No actual alcohol. But it will be fun, I promise.”

Little did I know I’d signed us up for the sleekest, chicest, party-of-a-sales pitch that the world has ever known. They even had a DJ.

Within minutes of arriving and eating our first of approximately 87 passed hors d’oeuvres, we’d become utterly convinced that our marriage was doomed—DOOMED!—if we didn’t register for wedding china.

Never mind the fact that I already have a perfectly lovely set of silver rimmed Mikasa plates, complete with all of the assorted tea cups and gravy boats…

“Should we pick out a set?” I asked PIC.

“I guess we should,” he replied. So we took our little scanner and headed over to the wedding china display (which is not to be confused with the regular china display). Our first pick was—surprise, surprise—a set of silver rimmed plates. I did have the good sense to point out that these would, at the very least, coordinate with the dinnerware we already had, so that if we were to ever, you know, host a formal dinner part of 36 people on our little 4’ dining room table, we’d be all set.

But the set we both liked was being discontinued. So we had to pick another.

After much deliberation we settled on a very modern looking Kate Spade design (gold rimmed as opposed to silver this time), which was quite convenient because if you registered for anything Kate Spade, you qualified for a free Kate Spade gift! Complete with her trademark bow!!!

I don’t own anything Kate Spade. And I didn’t even know that Kate Spade had a trademark bow (or that bows can be trademarked) but fortunately, the lovely women at Macy’s set us straight.

I shouldn’t actually be blogging about this because when we got home, sobered up and came to our senses, I realized:

The thing is, when you get married in your 30s and have both already had households of your own before moving in together, you don’t need a ton of stuff. We already have enough flatware. Our coffee pot is fine. There’s nothing inherently wrong with our Ikea wine glasses.

But when Macy’s has a DJ spinning Justin Timberlake in their bedding department and uniformed servers keep plying you with fake drinks and Gorgonzola tarts, you start to think that your flatware, actually, could use an upgrade. And it would be nice to have a better coffee pot: one that grinds the beans. And those confetti-looking champagne flutes are kind of cute. And even though you swore you were only going to buy eco-friendly bedding and already have enough linens to outfit a small youth hostel, that block print comforter is quite nice…

Fortunately, our scanner had a bit of a malfunction so even though we spent a good two hours scanning steam mops, fancy knives, multi-tiered cake trays, Fiesta ware, matching luggage sets and a whole host of other things we never knew we needed, we only ended up with a one page print out at the end of the night.

Unfortunately, we were still within the clutches of the Wedding Industrial Complex at that point so we decided to go back in and re-scan all of the serving trays and mixing bowls and definitely-not-eco-friendly-bathrobes without which our marriage would be doomed.

(Because stuff can do that, right?)

The next morning, however, I had a PBS-induced revelation. (Sometimes I think life—certainly wedding planning— would be much more fun without PBS and an anthropology degree. But such is life.)

I decided to delete about 75% of the items from our registry, and to go ahead and register for the more-expensive but eco-friendly and fair trade linens that I’d been secretly coveting at West Elm.

The Macy’s website doesn’t like me very much now. In fact, it keeps suggesting that I add this or that to our registry because we should “provide our guests with options” and should have “at least twice as many gifts as guests.”

Well Macy’s, nothing against you or the very lovely women who worked last month’s Sip-and-Scan (it was actually quite a fun night out) but I’m not buying.

George Banks is saying no. 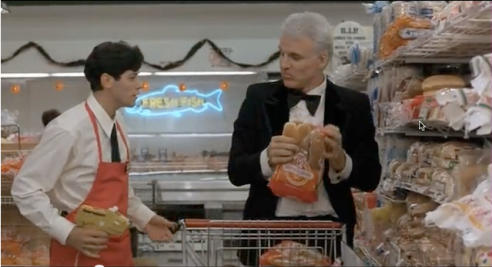 7 Responses to “A Lesson to Macy’s From George Banks”