It’s Thursday night, about seven minutes before curtain. I know this because I’m on my way downtown to meet PIC at the Merriam Theater on Broad Street. He texts me, as we were supposed to meet at 7:15 and I’m just getting off the subway at 7:15, so I tell him I’m just 20 feet away (which is not quite true) and I pick up the pace. Not only do I have to still grab our tickets from the press table inside and introduce myself to the new PR lady but I also have to get chocolate from the CVS down the block.

I’m not saying that Pennsylvania Ballet usually falls into this latter category. Quite the opposite, actually. I love their work, especially the story ballets like Giselle or Coppelia and I am already chomping at the bit for Swan Lake later this spring, which I’ve never actually seen it before (unless you count the film of the Matthew Bourne version, which I watched at the library during grad school in a well intended but short lived attempt to become better equipped with the classics of my chosen field).

I probably shouldn’t confess these things publically—what kind of dance critic hasn’t seen Swan Lake?—but if you think that’s crazy wait ‘til you get a load of this: I don’t like Balanchine.

But what can I say? I read Dancing on My Grave before I actually saw any real Balanchine and it colored my opinion of the choreographer. Plus his work is so… so quintessential. I like Bourne, and Wheeldon, and Kylian and Forsythe. You could of course make the argument that none of those men would be making the sort of work they make unless Balanchine had come before them, but I prefer to persist in my dislike.

Thursday night, however, Balanchine’s version of Prodigal Son was on the bill starring Alexander Peters in the title role. I couldn’t wait to see it because Alexander (I’m just going to go ahead and call him by his first name because this is my blog and I’m pretty sure we’d make great friends) is so new and so short and has such red hair; I think of him as a bit of an underdog. And I like to see underdogs without perfect ballet bodies get their due. Plus he was great as Puck in Midsummer Night’s Dream last season and he got promoted to soloist so I guess he’s not really an underdog at all really. Anyway, I tell PIC that I’m going to grab our tickets and that we are then going to run to the CVS because we might need chocolate (Alexander Peters or no, Balanchine is still Balanchine) and yes, we’ll make it back in time, I’ve done this before.

So we run, we grab two bars of Lindt dark chocolate and I stuff them into my purse. As we take our seats, I give PIC a quick crash course in ballet-going and the new soloist from somewhere in Eastern Europe about whom I’d just read a press release.

This new soloist? Oksana Maslova?  The one from Ukraine?

Her limbs go everywhere. She doesn’t even look human, and I mean that in the most complimentary way possible. She and Ian Hussey do this incredible duet in the first piece, Polyphonia, choreographed by Christopher Wheeldon, that’s like those Youtube videos you see of Chinese acrobats but so much more artistic somehow, so much more human. (And yes, I know, I just finished saying she doesn’t look human, but it’s Saturday morning and I’m a bit hyped up on pancakes and maple syrup so my literary prowess isn’t what it usually is).

Mathew Neenan’s new piece is lovely to watch, all pretty dancers in pretty chiffon jackets over their jewel toned leotards, but it seemed to leave so many questions unanswered. At moments it was sort of funny but not, sort of beautiful, but not. He’s still one of my favorite choreographers, especially here in Philly, but I wasn’t so sure about this piece and neither was PIC.

“Have another piece of chocolate,” I tell him.

PIC goes see a lot of stuff in theaters, but mainly rock concerts and Broadway plays so this is a new thing for him.

But the chocolate proves unnecessary with the final piece. The Balanchine piece, loathe though I am to admit it. The set was amazing: all dark, broad brush strokes and bright colors hinting at a 1920s version of a mythic Middle East (the work got its start with Diaghilev’s Ballets Russes) and my good friend Alexander was so very serious, so dramatic but believably so, so un-Puck like. The choreography revolves around a fence, which becomes a table, then almost the site of a crucifixion, then a boat, and finally the fence again. 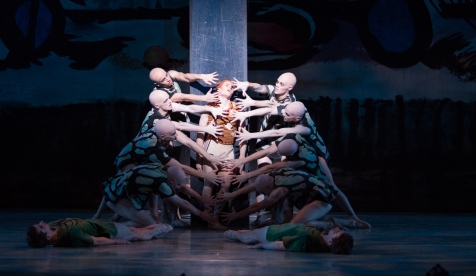 It was definitely not your average Balanchine work, none of the carefully plotted symmetry, none of the usual academic canons or music visualization but it was everything big and bold and spectacular, in both the spectacle and special sense of the word.

I loved it. And PIC seemed pretty impressed too, which bodes well for us. (Also there are three remaining performance, two today and one on Sunday: PA Ballet).