Last month my aunt and uncle came to visit. I’m not terribly close to any of my extended family so when my mom suggested I ask my aunt about “the thing” I had to stop and think for a minute.

“You know. Your height thing. Because your Aunt Chris is taller than your Uncle Mark and they’ve been together for years now. Maybe she’ll have some words of wisdom to offer.”

So I did. Granted, it took me several drinks to work up the courage but after a few Limoncello cocktails at Bistro Romano, I finally sidled up to my aunt and said, “Okay, so you and Uncle Mark. He’s shorter than you. How does that work?”

“It’s fine,” she replied. “I can always look him right in the eye.”

What I really wanted to know, though, was “How’s the sex?” The logistics, the lining up of the requisite body parts, the being made to feel protected and small and delicate…

Only one doesn’t ask those sorts of questions on my dad’s side of the family, so I returned to my seat, had another drink and thought about it instead.

Why on earth would I want to be either of those things? 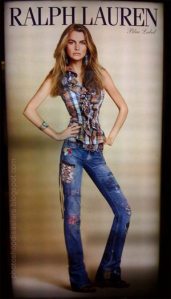 I know that my “height thing” is superficial and while there may have been some evolutionary advantages in selecting a larger partner with whom to procreate back in the day, we’re living in a post-industrial world now. Size isn’t everything.

I’m also intelligent enough to realize that my preferences are the result of the enculturation process: of magazines, of bridal shows, of photographs, of advertisements, of what I (and society in general) have been conditioned to consider “normal” and “correct” and “aesthetically pleasing.”

The obvious answer is that I like to date taller men because I like to wear heels.

The less obvious answer is that I like to wear heels (and date taller men) because I am insecure about my body.

This isn’t exactly a surprise. I started dancing professionally when I was nine years old. I’ve spent the better part of three decades looking at myself in the mirror. When I was in college, I’d always get to my ballet classes early, not necessarily to warm up but to ensure that I could get a spot at the barre by the “skinny mirror,” the one that was, for whatever reason, a different brand than all the others and made you look tall and thin no matter how many dining hall cookies you’d consumed the day before.

I’ve never had an eating disorder but I’ve never been all that satisfied with myself either. I’m actually shocked—literally shocked—when I see photos of myself and realize that I’m actually kind of tall and thin already, without the help of a skinny mirror. This photo, for example, is of me performing with my dance company at the Suzanne Roberts this past weekend. Not bad right?

Nevertheless, I’m forever resolving to lose five pounds, to go running more often, to work on my abs: maybe if I do crunches every day starting on my birthday, I’ll stick with it… Or maybe New Years… Or maybe a Monday… Or maybe a Monday three months before the start of bathing suit season so that I’ll have a proper incentive…

And it’s not just my abs.

My biggest complaint, actually, is the size of my calves.

I know, I know. It’s muscle. And it’s there because I am a tap dancer. And it’s actually pretty sexy when I’m in heels. But when I’m not in heels? When I’m attempting to look cute and pixie-like in ballet flats? When I’m trying on skinny jeans and can’t even get them on past my ankles? When I have to buy “wide calf” boots because the normal sizes just won’t zip? Then it is very much not sexy. At least not as far as I’m concerned.

And yet it is because of my calves that I am where I am today. So maybe, just maybe, it is time to finally succumb to the endless barrage of new age, embrace-yourself rhetoric and LET GO.

I mean what’s the point of being small and delicate? Sure, it’s great if you’re a flower. Or a butterfly. Or a princess or a ballerina (or, since we’re being realistic here, if you’re a sex columnist like Carrie Bradshaw) but I am none of these things and nor (past Halloween costumes aside) do I want to be any of these things.

Old habits die hard though. I have only ever dated taller men. In fact, I wouldn’t have given my last boyfriend a second glance if he hadn’t had a life-threatening disease that messed with his hormones and made him taller than he should have been. (And if that’s not messed up, I don’t know what is.)

The problem with going through a break up in a semi-mature and semi-reasonable fashion, however, is that you learn a lot about yourself. And as the months go by, it gets harder and harder to blame your ex for everything. Eventually you find yourself admitting, “Actually, I kind-of-sort-of-might-possibly have been part of the problem here. I was unhappy with myself. And I made someone else responsible for my happiness. And I should not have done that. And I will never do that again.”

So you work on yourself. You cry and scream and throw things and drink a lot but then you get it together and you become productive again. Creative again. You go back to writing, to yoga, to salsa dancing, cultivating new friendships and restoring old ones with a humble, “Yeah, so remember how I kind of ignored you for the past two and a half years because I had a boyfriend? Well, about that. I was an idiot and I am sorry. Will you still have me?”

And somehow, somewhere along the way, something shifts. You feel sexy again. Gorgeous even. More so than ever before. And you no longer need a man to make you feel small and delicate because you don’t want to be those things anyway.

I came to this realization, surprisingly enough, not a moment too soon. The European, you see, is not very tall. He is of average height. In fact he is not-actually-taller-than-me-in-heels. (Shock! Gasp! Horror!)

I spent the first few weeks of our acquaintance wearing flats and I felt fine—a bit more comfortable than usual even (go figure)—but then we decided to go out in Atlantic City and I wanted to wear a short skirt. And ridiculous jewelry. And my fabulous silver patent leather Carlos Santana heels.

I asked The European how he felt about this.

“We don’t have much of a height differential,” I explained trying to make it sound more like an objective scientific observation than an accusation.

He simply shrugged, as if he hadn’t even noticed, and assured me that he found heels very sexy.

So I wore them. And, would you believe it? The world didn’t come to an end. In fact, we were exactly the same height and we had a lovely time.

Of course it probably doesn’t hurt that The European takes care of himself and has quite possibly the nicest body of any man I’ve ever dated. It also probably doesn’t hurt that he practically worships me in bed. The first time we made out, he spent a good five minutes kissing just my ribs. I was lying there thinking, “Seriously? My ribs? What is so sexy about a pair of ribs? Can we please move it along now?” but then the new age voice in my head told me again to let go and well, I am glad I did because the ribs were just a prelude.

So there you have it folks: I am done. Over it. Finished with making my problems someone else’s and moving on.

6 Responses to “The Height Thing”