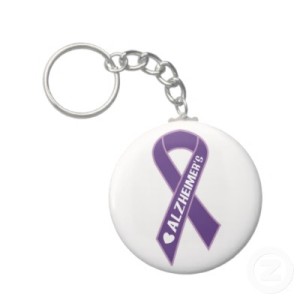 I’ve been avoiding this post for a while.  It’s too personal.  It’s not fun.  And there’s really no way to even inject a bit of humor into the situation because you’re not supposed to joke about these kinds of things.

My grandmother has been diagnosed with Alzheimer’s disease.

I’m not used to this sort of thing.  No one in my family has ever had Alzheimer’s or breast cancer or any of those other “causes” that they ask you to donate a dollar for when you go to the supermarket.  And while I don’t mean to trivialize either these diseases or the people who’ve been through them, I’m not used to ribbons or fund raisers or “raise awareness” campaigns.  Heck, I wear pink all the time as a dance teacher and the one day I chose to vary my wardrobe last fall was the day we were supposed to be “celebrating” breast cancer.

But now, things are different.

And I feel guilty.  It’s no big secret that I think my grandparents are crazy (remember this post about the Philadelphia Flower Show or this one about the Cat Mobile?) but now there is a legitimate reason for it.

And so on and so forth.

My grandfather, being a typical 1950s husband (and a Latino husband at that) has no idea how to run a household.  He doesn’t know how to write a check—literally; I wish I was exaggerating here—and don’t even get me started on cell phones.  Even regular phones, for that matter.

When you combine the lack of knowledge on his part with the loss of knowledge on hers, you get a pretty god-awful situation.  (And believe you me: there are no Hallmark moments here.  They should’ve gotten a divorce years ago.)

Moral of the story?  They’re moving in with us.

My brother, as some of you may know, left the solar energy industry to become a long haul trucker several months ago.  As such, he gave up his apartment and moved back home but he’s only around a few nights every month because he’s saving to buy his own truck.  Aside from a few minor scuffles over the bathroom soap and whose turn it is to use the laundry machine, he’s been a rather painless housemate.

But now my grandparents?  They’re an entirely different story.  And they bring the grand total up to six.

We’ve got the twin beds and the Ikea duvet covers to prove it.  And just this evening, I had to grandmother-proof my protein bars.

I’m trying to maintain a positive outlook, if only for my mother’s sake:

Maybe my grandparents and l will drink tea together and have nice chats about the meaning of life like that guy who wrote Tuesdays with Morrie!  Except I’ll be the one doing the writing this time and no one will die at the end…

Maybe, just maybe, I’ll be able to turn my grandmother into a democrat…

But the odds of convincing my grandmother to vote for Obama are about as great as the odds of her teaching me to cook.  She hardly ever cooks anymore and even when she does, it doesn’t get much more exotic than rice and beans.

The best I can hope for is that she’ll forget to vote on November 6th.

22 Responses to “My New Roomies”