Well. There is, like, a lot going on right now. I don’t even know where to start. So I shall begin with this: I am currently sitting in bed with my laptop because my home office is in the non-insulated part of the house and it is warmer upstairs and I don’t want to turn the heat up because 2016 is going to be an expensive year for PIC and I— potentially a very expensive year—so it makes more sense to “accidentally borrow” his comfy black sweatpants for like the third day in a row and hole up in bed, right?

Anyway, it was a long weekend; a very long but very good weekend, during which time I discovered that it is, actually, entirely possible to make whip cream by hand (and that angry cream-whipping is way better than angry dish-washing). I wasn’t actually angry per se— just frantic really, because Tech Support had decided to pop The Question to his girlfriend on Saturday and he had enlisted me to make her favorite dessert as a surprise.

But let’s pause for a moment to reflect on the first part of that last sentence: Tech Support, my younger brother, formerly of the “I’m never getting married” and “I hate kids” persuasion, went and fell in love a few months back.

He is always very private for his personal life so for a while, all any of us knew was that he was dating someone. Eventually that “someone” had a name. Then she had two kids. Then she was deemed “Bistro-Worthy” (Tech Support only brings the very best of his love interests to our favorite Italian restaurant, Bistro Romano) and finally, a few months ago, we were allowed to meet her for the first time.

I’m going to call her The Translator for now (I’ll explain this nomenclature at a later date but for the time being, you’ll just have to take my word on it because if I go into now, I’m going to get all emotional and that is not a good look on anyone, least of all me); anyway, she’s awesome and we’re actually meeting for lunch in a few hours because yes, we do lunch together. My parents love her and she is, without a doubt, the best girlfriend my brother has ever had.

So, this past Saturday afternoon, he popped the question.

He wanted both families involved: her kids and our parents, so we all trekked out to one of the new parks along the river where my mother and I spent the majority of the afternoon whispering back and forth, “Has he done is yet? Why hasn’t he asked her? That would have been the perfect spot!”

The Translator’s kids (aka the CUTEST HUMAN BEINGS on the ENTIRE PLANET who are going to be MY FUTURE NEPHEWS!!) were getting tired, poor PIC was lugging around a huge Ikea bag full of toys and discarded jackets, and I was worried than my hand-whipped strawberry shortcake wasn’t going to pass muster but Tech Support finally managed to get both kids and their mother up into a tower overlooking the river while the rest of us were skulking around below, trying not to look like complete nut jobs crashing a proposal…

Anyway, she said yes. And my cake was most excellent. And we all had ice cream. And I am going to be an AUNT!!!! 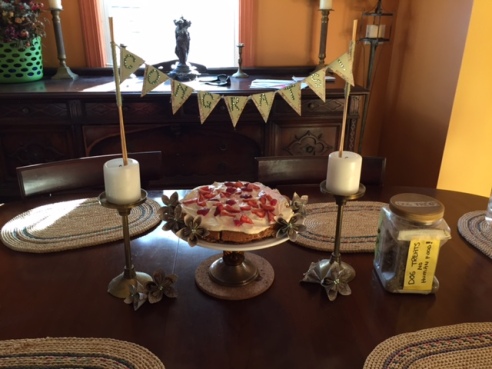 As for their wedding date? Well, that’s a story for another day…

25 Responses to “And Then Tech Support Popped the Question”