PIC was born with collapsed ear drums. I’m not really sure what this means except that he doesn’t really like talking on the phone with anyone (present company included) and that he usually wears a head set hooked into a pair of earmuffs when he calls his parents every Sunday night.

Last Sunday night, having spent the past 4 hours at a rather stressful rehearsal with my tap company, I came home and started mainlining Jordan almonds.

I know, from my dedication to wedding shows, wedding magazines, and all things bridal, that Jordan almonds are NOT cool. They are a thing of the past. An artifact, if you will. No self-respecting 21st-century bride would be caught dead giving Jordan almonds as wedding favor.

But I love the little buggers. Always have. Especially when they’re dressed up in metallic colors instead of the traditional pale pinks and baby blues. You know that shiny gold coating is made of something no human being should eat but if you’re anything like me (or my mother) you just can’t help yourself. 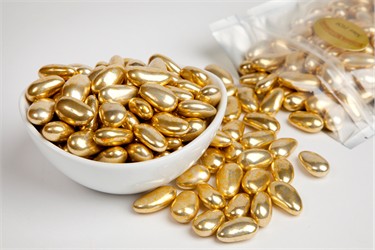 And so when PIC announced that he had a Yodel craving during one of our semi-daily trips to the grocery store (we have yet to discover the concept of pre-planning our meals for the week so we end up going shopping almost every other day and purchasing approximately 4 items at a time), I decided I would treat myself to an equally ridiculous box of treats: an entire package of pastel colored Jordan almonds.

Anyway, I’m popping those babies by the fistful. And naturally a small piece of the crunchy candy coating gets caught in my throat. It tickles, and even though I can still breathe perfectly fine, my body’s natural reaction is to purge the alien object from my system by erupting into a rather violent coughing fit.

PIC pulls his microphone/earmuff contraption from his head to ask if I’m okay. I try to tell him I’m fine but giving the fact that I’m doubled over and sound like I’m throwing up, he doesn’t quite believe me.

(When a glass of water fails to dislodge a Jordan almond shell, you have to move onto something heavier, like peanut butter.)

(I can come up with any excuse to eat peanut butter.)

“I told you I was fine!” I insist. But he still isn’t convinced.

The next morning, I get an email from his mom wanting to know if I was okay because it “sounded like” I was “coming down with something” the night before.

Have you ever had to explain to your future mother-in-law that no, you weren’t choking to death or dying of the plague, but rather that you suffer from an acute addiction to Jordan almonds (and that this addiction prevents you from eating them slowly, one at a time, like a normal person?)

Well, take my word on this. You’ll sound like a moron. You may even start to rethink your relationship with Jordan almonds.

True love knows no such bounds.

4 Responses to “On the Virtues of Jordan Almonds”