I’m going to take a break from telling embarrassing stories about my brother today and tell one about myself instead:

Once upon a place (Oxford University, circa 2006), I volunteered to costume a student production of… actually I can’t remember the name of play. Or even the playwright (and even though I’ve googled “play about mountain climbers” I still can’t figure it out) so we’re just going to leave it at that.

What’s important is that the cast was comprised almost entirely of men: smart British men with British accents and British names and—most importantly— a British understanding of the term “pants.”

As the costume designer and wardrobe mistress, one of my many jobs was to measure inseams. The act of measuring a man’s inseam can look a bit, well, improper if you don’t know what’s going on so I decided I should explain exactly what I was doing before getting to work by announcing, “I’m measuring you for your pants!”

Moral of the Story? Before slipping a measuring tape into a British man’s groin, be sure to allay his fears with the knowledge that you are measuring him for his trousers. Not for his pants.

And now, on an unrelated note, last night’s dinner was surprisingly decent. I forgot to take a picture of the entree (grilled chicken with a quinoa/goat cheese/candied pecans/dried cranberries salad over a bed of spinach) but here are few shots. Notice, in particular, PIC’s most excellent flower-to-napkin color coordination. 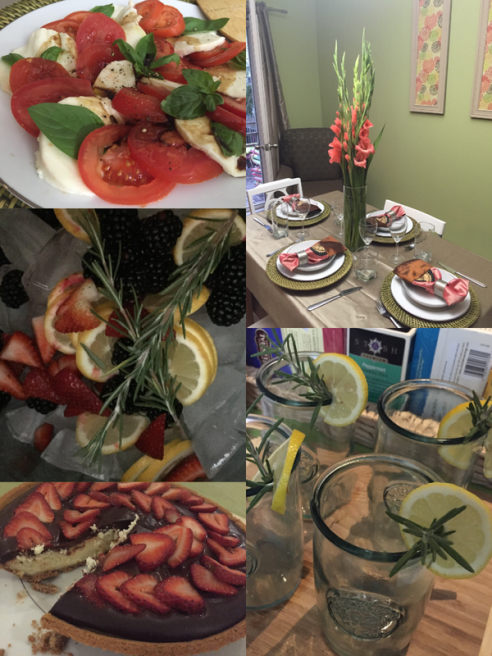