After thirteen months, 60-some properties, three agreements of sale and almost a month of tearing various things out of my new house, I’m proud to report that today’s broadcast comes to you– finally– from my new office.

It’s a mess and filled with boxes that still need to be unpacked and I am, at present, using a paint sample as a coaster (I should probably Pinterest this particular stroke of genius) but it is so perfect that sometimes, quite regularly actually, I just sit back and cry because I am so damn happy. 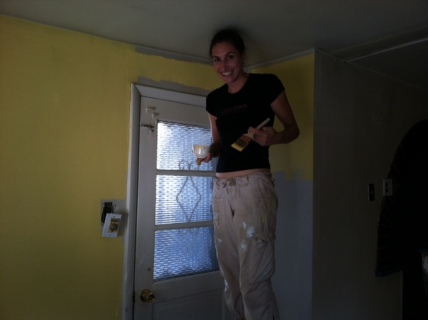 Add a couple pieces of furniture from Crate and Barrel (which I got for a steal at the Habitat for Humanity Restore in North Philly), a second hand filing cabinet and voila! 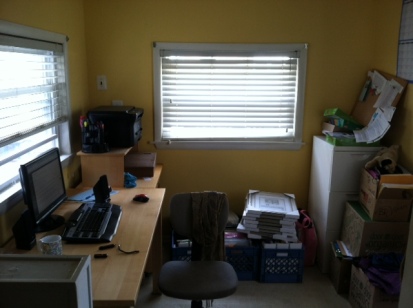 Granted, it’s a bit of a disaster zone right now but now that my dance company has both an official intern (who starts tomorrow) AND and an official World Headquarters (a small room in my new basement), it will, with a little luck, look a lot better the next time I take a picture.

The rest of the house is not yet blog-worthy.  (Post-apocalyptic film set, remember?)  I’ve thrown away 25 bags of debris (and I know this not because I counted them but because I bought an entire box of “large” trash bags at Home Depot and they’re half gone). They’ve contained, in no particular order, approximately 550 square feet of foam dropped ceiling tiles, an entire stairwell’s worth of metallic blue wallpaper and popcorn walls (yes, popcorn walls), a few hundred faux bricks made of styrofoam and the first round of carpeting, which was, for whatever reason, stapled up and over the baseboards onto the wall in just about every room.

But its getting there.

2 Responses to “My New Office”