I was really cool in college.  So were my roommates.  We were so cool in fact that upon finding ourselves with nothing to do on Halloween (i.e. no parties to go to, no boyfriends to go out with, no alcohol to drink and no illegal subsistence to consume) that we decided to go reverse trick-or-treating. 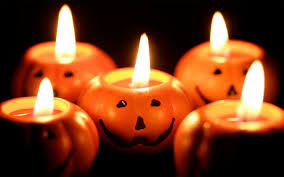 I’m pretty sure it was my idea.  (In addition to being really cool, you see, I also had some really cool ideas.)  The plan was to go door to door giving candy out instead of asking for it and everyone would find us so adorable that we’d be the most popular girls on campus by the end of the night.

Surprise, surprise, it didn’t quite work according to plan.

Most folks who answered the door were confused.  “(Huh? We don’t have any candy.  Oh.  You’re giving out candy?  Why?”)

Or suspicious.  (“Is this a trick?  Is there something wrong with those lollipops?”)

Or engaged in sexual congress.  (To this day, I don’t know why they bothered to answer the door.  Unless they were waiting for a third party to arrive?)

In fact, I just wrote an email to an old professor and had a minor conniption as I began to write, “Dear Professor so-and-so, I’m not sure if you remember me but my name is Kat Richter and I took your class in… when was it?  2003?  OH MY GOD!!!  That was 10 years ago!  I was a college Freshman TEN YEARS AGO!!! I am OFFICIALLY OLD!!!  This is best I am ever going to look in a bathing suit.  This is the firmest skin I am ever going to have.  These are big as my breasts are going to get (unless of course I have children).  My life is OVER!!!”

But then I thought about how “great” my freshman year really was: the bad hair days, the parties I didn’t go to, the fifteen pounds I gained thanks to those damn Sunday morning omelets and finally the well-intentioned but ill-fated reverse trick-or-treating.  Suddenly being ten years older than my college freshman self didn’t seem like such a bad thing.

In fact, it seemed like a very good thing.

What Halloween traditions are you glad to leave behind this year?