This morning I went to Planned Parenthood.  I go every three months to pick up my birth control pills and again in August just before my birthday for my annual pelvic exam.

My usual concerns when going to Planned Parenthood are:

A)     Where am I going to park?  Parking in Center City is never easy.

B)      How long is this going to take?  The folks at the Locust Street branch are always friendly and seem pretty efficient but if you don’t have an appointment, you can find yourself sitting in the lobby long enough to watch an entire Tyler Perry film.

I’m never worried about getting stopped by protestors because let’s face it: this is 2013.  This is Philadelphia.  We’re not like that here.

But that doesn’t stop the elderly, white-haired man on the sidewalk from accosting me.

“Would you like some information?” he asks.  “Some options?”

Although he doesn’t use the “a” word, the message is clear.  I’m a young woman of child bearing age.  If I’m going in to Planned Parenthood, I’m obviously irresponsible, pregnant, and too ignorant to be trusted with making my own decisions about my body.

I’m too shocked to say anything other than, “No thank you.”  Only then, as I hurry past, do I notice the young woman in an orange vest standing a few feet further down the sidewalk.  The vest says, “Planned Parenthood Escort.” 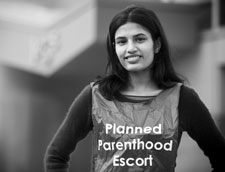 I’ve read about the escorts before—I saw a notice in my Meeting’s newsletter about a training session for new escorts to volunteer at a clinic in New Jersey—but I never thought I’d see an escort in Philadelphia.  In my city, at my Planned Parenthood.

“Don’t let them give you anything,” the old man calls out.  “Don’t take anything from in there!”

I’m so angry that I can’t even open the door properly and the security guard has to tell me how to do it.  My hands are shaking as I fill out my form:

Reason for your visit?  Supply Pick Up

Will you be using insurance? No

Do you have insurance? No

I take my seat in the lobby and try to think Quakerly-thoughts like the smart people at my meeting in Trenton who never seem to get angry but only have wise things to say.  Maybe I can talk to that man—talk some sense into him—but then I recognize an acquaintance from the tap community across the lobby and think, before I can stop myself, “Her too?”

Part of me wants to call out “Hello!” but then I begin to wonder if she’d rather be anonymous, protected from those on the sidewalk by the thick blocks of frosted glass that serve as windows and protected from her fellow “clients” by the clipboard in front of her.

And that gets me thinking: I don’t necessarily want to be recognized either.  I get in and out of the clinic as quickly as possible, and whenever I have to pick up my pills, I dodge questions about where I’m really going, especially in front of my grandparents.  I’m always reminding myself that I’m a “good girl,” that I don’t “sleep around” and that I wouldn’t have to go to Planned Parenthood if I had one full-time job and the health insurance that comes with it.

As fate would have it, we get called up to the counter at the same time.  There’s no avoiding “hello” now: we’re both artists, we both work a hundred different gigs to pay the bills and we’re both at Planned Parenthood.  This isn’t something to hide, and yet, I still feel like it is.

The nurse hands me my pills and as per Planned Parenthood protocol, she places them into a small brown paper bag.  They’re already in a protective plastic blister back, a blue plastic envelope and a foil wrapper, but they (like tampons, maxi pads and most things associated with the female reproductive system) have to be hidden.

The nurse tells me to have a good day, but there’s something different in her tone than usual.  She knows the protesters are out there, and she’s warning me to prepare for battle.

I’m still trying to think of something to say to the man outside the clinic when he approaches me again, proffering a fistful of sweaty brochures printed on pastel paper.  He’s holding a rosary.

“Please take one of these,” he begs.  He looks so old.  So unhappy.  So sad and in pain and I wonder if he should even be out here on the sidewalk.  I’m sure he feels like he is doing God’s work and although he isn’t rude or abusive like some of the protestors I’ve seen on TV, he’s laid a sign down on the sidewalk that says, “They kill babies here.”

“No thank you,” I tell him.  And then, because I have an embarrassing habit of being polite to people even when they’re pissing me off, I add, “Have a nice afternoon.”

For a moment, I consider asking him to join me for a cup of coffee at the café just next door.  After all, good Quakers don’t try to talk sense into people; they listen.

But I’m not quite good enough.

In fact, I’m thinking of the summer before last, the time I went to Planned Parenthood for my annual pelvic exam and was told that I would have to go for a transvaginal ultrasound because they found “something” on one of my ovaries and since my grandmother died of ovarian cancer, it would be best to check…

I was so scared coming out of the clinic.  I couldn’t tell anyone.  I had only just met my boyfriend at that point and it was my brother’s birthday so I didn’t want to ruin our family dinner with the announcement that I might or might not have cancer.  I ended up wandering around the city by myself, finally stopping in at a café for an iced coffee only to discover that I had forgotten my wallet.

Those few days were the scariest days of my life.  And I turned out to be just fine.

But what if it wasn’t just a cancer scare?  What if it was a baby?  A baby that wasn’t planned and that I couldn’t support?  What if I was still a teenager?  What if my parents were going to kick me out?  What if I had been raped?  What if I did have to make that choice?

Should I have to put up with an old man and his rosary and his signs and his wrinkled pamphlets making assumptions about me and my situation?

Part of me wants to tell him that I’m not pregnant.  That I’m good person, that I pay my taxes and that I have a job.  That I teach at a college, actually, and that I’m only here to pick up birth control, not to get an abortion.

But the truth is it’s none of his business.  Unless of course he’s there to offer his services as a foster parent for all of the babies he’s trying “rescue,” in which case it’s still none of his business but it wouldn’t be quite so hypocritical at least.

His presence there on the sidewalk does have one effect though.  Before I realize what I’m doing, I turn around and head straight for the escort.

She doesn’t look particularly tough, or brave, or even much older than some of my students.

“Thank you for being here,” I say.  “Do you need more volunteers?”

Her face lights up.  “Yes.  We always need more help.”

I’m sick of hiding.  Sick of lying to my grandparents when I’m going to pick up my pills.  Sick of worrying that little kids at soccer games are going to find that tell-tale blue envelope in my purse when they start rooting around in search of chocolate.  I’m sick of hurrying down the sidewalk for fear that someone might recognize me when I’m on my way into the clinic, sick of feeling embarrassed over the fact that I don’t have health insurance and that I can’t afford it.

Most of all, I’m sick of being afraid to say “hello” to an acquaintance inside the clinic simply because she might think  I’m here for something “worse” than birth control pills: a pregnancy test, maybe, or an AIDS/HIV screening.  And I’m sick of the way I react to seeing other women in the clinic, of wondering, “What’s wrong with them?”

There is nothing wrong.  What’s wrong is the hiding—that and the fact that women’s bodies have become grounds for political debates that have nothing to do with reproductive rights or “saving babies.”

I doubt the old man on the sidewalk will ever read this, but just in case I want you to know that I don’t hate you.  We have a broken system in this country—multiple broken systems, actually, with healthcare being just one of them—and I can only assume (since I didn’t have the courage to invite you for that cup of coffee) that you are out on the sidewalk because you feel it’s your duty.  Your tactics aren’t working though; your tactics are convincing folks like me to volunteer for Planned Parenthood.  And I didn’t stop there.  I went a little crazy in the “Shop” portion of the Planned Parenthood website as well, so the next time I see you, I’ll be sporting my new PP gear with pride because I am done hiding.

Update: Thank you to the folks over at Freshly Pressed for featuring this post.  If you feel moved to make a donation to Planned Parenthood as some readers have already done, you may do so here. Thank you for reading and for helping to shed some much needed light onto this important issue.