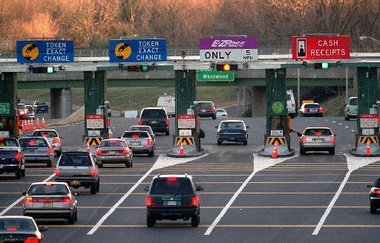 Somewhere between The Wedding Date’s house and his parents’, I began to panic.  Not because I was about to sit down to dinner with folks who might be my in laws someday, not because I’d be meeting TWD’s great aunt for the first time, and not even because I was afraid my sweater dress and high heeled boots combo wouldn’t pass muster (because I was pretty sure it was).

Okay, actually that’s a lie.  I had thought about them.  I had even planned to leave early to go to the bank and get some cash, but then TWD’s kid’s flight landed early and he called just as I’d finished painting my nails to tell me to meet him at his parents’ house at 4:00 instead of 4:30 or 5:00.

I’d been planning to leave at 4:00, not be there at 4:00.  So there I am with three cheesecakes cooling in the fridge, four dozen cookies on the counter and no way to transport anything into the car because my nails are wet.

Ordinarily, I wouldn’t care about my nails.  But TWD’s mother always has her nails done.  And her makeup.  And her hair.  Whenever I see her, my nails are chipped and badly in need of repainting and even though she’s never been anything other than perfectly nice to me, I don’t want to think that her son is dating a crack whore.

So I sit there.  And I wait.  As I blow on my nails, I perform a bit of mental triage:

I can do my makeup when I get there.

I’ll just leave my hair pinned up like it is now.

I’ll throw all of the desserts into one tote bag, whether my cheesecakes are properly cooled or not.

The roads are clear and I manage to make it to the Parkway with nary a wrong turn.  My grandfather’s car is cruising along at 55 miles per hour and his registration card is tucked safely away in my purse (because if you leave it in the car like a normal person, someone might steal both the car and the registration, and then you’ve “got a real problem on your hands”).  The clock on the dashboard is a full eight minutes fast, so really I’m not doing too badly.

But then I arrive at the toll booths.

And they’re not just asking for a measly 50 cents.

They want $0.75 and in my rush to leave TWDs house, I had completely forgotten to stop at the bank.

There are no banks on the Parkway.  There are no ATMs.  There aren’t even any rest stops selling crappy pizza.  And I don’t have 75 cents.  I have 50.

So I pull over and put my hazard lights on.  I dig through my purse, my laptop bag, my suitcase, the glove box (which is covered with Jesus paraphernalia), the cup holders and even the mats on the floor but my grandfather is rather fastidious about such things.  As such, I find an old water bottle, some tissues and a whopping fifteen cents (mainly pennies), which means I’m still ten cents short.

I decide to go with Plan B.

Plan B, for those of you who don’t know, involves lipstick, eyelash batting and a fervent prayer to the gods that I’ll pick a lane with a male toll booth attendant.

I pull back onto the highway and slowly inch my way forward.  There, to my great delight, is a middle aged man who looks rather distressed from having spent Thanksgiving stuck in a toll booth.

“I’m so sorry,” I begin.  “I’m driving my grandfather’s car and he doesn’t have EZPass and I’m ten cents short.”

“I’m ten cents short,” I repeat.   “This is my grandfather’s car and I forgot that he doesn’t have EZPass.”

He pauses for a moment.  I consider telling him that I’m running late because I had to paint my nails, because I don’t want TWDs mother to think that her son is dating a crack whore, and that I’ve got three lovely chocolate cheesecakes in the back seat and I would be more than happy to part with one—maybe even two—of them if he’ll let me slide just this once…

“Oh my God!  Thank you soooo much!  And Happy Thanksgiving!”

I feel really clever for having added the “Happy Thanksgiving” bit at the end, because I’m sure that I’m the only person who’s wished this particular toll booth attendant an enjoyable holiday.  I then proceed to exit the Parkway, get completely lost, pull over to turn on the GPS feature on my phone only to discover that the battery is nearly dead.  I have just enough juice to A) call TWD to tell him I’m running late or B) try to find my way to his parents’ house.

I chose Option B.  By now, he knows that being tardy is just one of my many adorable quirks (at least that’s how I choose to think of it).

“What happened?” he asks when I finally make my way through the front door of his parents’ house.

“Nena…” he sighs.  “You should have just told me you didn’t have any cash.  You could have borrowed some.”

“No!  That’s where it starts!  First its five dollars for the tolls, then its $20 for dinner that you say was a loan and I say was a gift and the next thing you know we’re on Judge Judy!”

“I won’t let that happen,” he assures me.  “Now did you remember to bring the chorizo?”

TWD’s family does Thanksgiving a bit differently.  In fact, I don’t even bother with the turkey because there’s TWD’s chorizo, plus his mom’s crab cakes, plus his dad’s ceviche and those are just the protein options.

At the start of the meal, the kids are told they have to start by listing the things they’re thankful for.  It is at this point that I start to lose it.  I’ve never been to Thanksgiving dinner with anybody else before—not someone I’m dating.  Not someone who has kids and parents and a sweet old grandmother who always seems happy to see me even though the language barrier prevents us from actually conversing.

And you know what?  It’s kind of nice.

If we continue going around the table, it’s going to be my turn next but I’m getting all weepy and I’m wondering how TWD’s parents feel about weepy people at the dinner table.  It’s a regular occurrence in the Richter household, especially now that my grandparents have moved in, but here?  Now I’m really am going to look like a crack whore.

Fortunately TWD cuts in before I have a chance to say anything, then his father takes over and then we eat.

My cheesecake is a hit and we spend the rest of the evening watching Youtube spoofs and Mr. Bean.  TWD’s dad tries to tell me about a “shortcut” for my drive back to Philadelphia but TWD looks at him, looks at me and says “Keep it simple, Dad.”

Then he pulls five dollars from his wallet, tells me he’ll see me tomorrow and sends me on my way.

And with that, Round 1 is complete.

11 Responses to “Of Cheesecake and Toll Booths (Thanksgiving Part 2)”