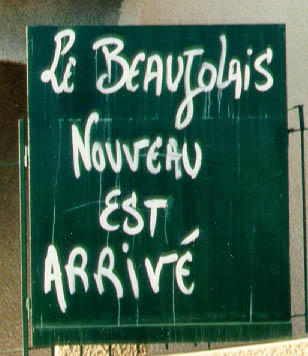 On Sunday morning, I had a brilliant idea.

“Let’s go to Trader’s Joes!” I tell The Wedding Date.  “The Holiday Beaujolais should be out by now!”

The Holiday Beaujolais is somewhat of a tradition in the Richter household, and it’s only sold during the holiday season, hence the name.  My dad always drives up to Princeton to load up because they don’t sell wine at the Trader Joe’s in Pennsylvania due to the state liquor laws and since TWD lives in New Jersey, I figured we could save my dad the trip.

So TWD pulls out his smart phone, finds that the closest Trader Joe’s is in Shrewsbury and we head out.

Every time I visit him, I feel like I’m going back in time.  As we make our way north, things start to look familiar.

But I know.  I’ve been to that Applebees on the corner!

“We are!” I exclaim.  “I used to hang out at the Applebees in high school with my posse of bad ass homeschool friends.”

“And there’s a JoAnn Fabrics in that strip mall!  I bought the pattern for my prom gown there!”

We pass Fort Monmouth and I tell him about the time I went to an anti-war protest there at the start of the invasion of Iraq, and how someone driving by yelled that we were all dirty hippies and that I should get a job.  I tell him about the library, and how the folks at the Shrewsbury Branch were way nicer than the folks at our branch.  Finally, I tell him about Trader Joes; he’s never been before so I tell him to try not to get overwhelmed, to remember that we are here for the wine and only the wine, because on the Sunday before Thanksgiving, it’s going to be a mad house.

But there is something wrong with this Trader Joes.  The wine is usually along the side wall but on the left side of the store is produce.  Rows and rows of produce.

“It must be on the other side,” I tell him, dragging him past the organic corn bread mix and the chocolate covered cranberries.

But on the other side of the store is candy.  Rows and rows of candy.

“This isn’t right,” I say slowly.  They never stock the wine in the middle of the store.

“Let’s go ask,” he suggests.  So we head over to the customer service counter, bang our firsts and yell “Where’s the WINE???”

TWD is doing the talking because I’m so distraught.  He politely inquires as to whether or not this particular Trader Joe’s sells wine only to find out that the liquor laws in New Jersey are almost as Draconian as they are in Pennsylvania.  It turns out that there are only TWO Trader Joes in the entire state that sell wine: Princeton and Westfield.

I consider purchasing a box or organic cornbread mix to console myself but being that it’s the Sunday before Thanksgiving, the lines to check out are already winding back through the aisles and I don’t want it that badly.

When I call my dad to tell him the bad news, he replies, “Of course you couldn’t get wine in Shrewsbury.  They only sell wine in Princeton and Westfield.”

Leave it to him to know the exact locations where one can acquire the Holiday Beaujolais.  Some days I feel like such an amateur.

11 Responses to “In Search of Beaujolais”