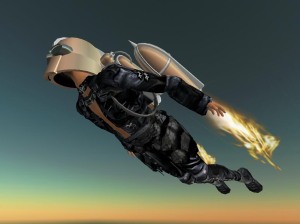 I have an idea.  A really good idea.  Better than a jet pack or a robotic pug.  (I don’t actually have any use for a robotic pug but The Wedding Date is very anti-dog so a cuddly cyborg might be the best I can hope for if we ever move in together).

It came to me last night while I was on the phone with TWD.  It’s been nearly a week since we last saw each other and even though a week may not seem like a very long time, it is when you’re cold and lonely and sleepy and stressed out.  A week is forever then.

“Can’t you come over?” I whined, knowing full well that the 90 minutes drive was out of the question at such an hour.

“You come over here,” he replied.  “My bed’s bigger and less squeaky.”

And that’s when it hit me.  He didn’t need a jet pack, not when the rotation of the Earth already provides a means of instant transportation just waiting for some brilliant mind to come along and harness it!

I’ve never really believed in gravity.  To me, there’s no such thing.  Rather, there’s just nothing to hold things up, so of course they fall down.  Buildings don’t fall down because they have walls and beams and things to hold them up, not because they’re built to overcome gravity.

So here’s my idea.  Rather than flying anywhere, you just jump.  Really high.  Like high enough that you’re out of the atmosphere and therefore beyond the reach of the Earth’s rotation.  In all actuality, you’d probably need some sort of high tech elevator to launch you into outer space but I see no need to get bogged down in details at this stage in game.

Anyway, once you’re out there, you just wait for the earth to rotate thereby bringing your destination of choice to you.  When it arrives, you head straight down again and presto: you’re in India!

The good thing about the Kat-apult is that it’s versatile.  At least for east/west travel.  I haven’t quite worked out the logistics for north/south but seeing as we’re talking about lines of longitude here, I’m sure I could hardness the magnetic pull of the North and South Poles somehow.

Of course, you’re all sworn to secrecy at this point.  Now that I’ve shared my brilliant idea, you have to promise not to share it with anyone else.  At least not until I’ve patented it.