I’m hoping, as I pull into the parking space in front of The Wedding Date’s house on Wednesday night, that he’s going to sweep me up in his arms and tell me he’ll do whatever it takes to be with me: sell his house, quit his job, move to Philadelphia, anything so long as we can be together.

And frankly I shouldn’t expect him to.

Especially because he’s not even here yet. 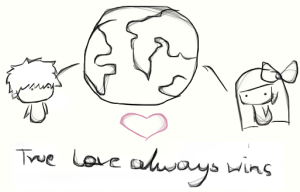 I knew it was going to be a difficult conversation, which is why I went to yoga the morning after last Tuesday’s conversation, convinced my partner-in-crime to join me for a much needed “working lunch” and decided to bring my best self to the table—the self that isn’t always stressed out and running late—so I left Philadelphia fifteen minutes ahead of schedule and arrived at The Wedding Date’s house with time to spare.

Instead of professing his undying love and willingness to do anything for me, he clutches his chest when he sees my overnight bag.

He shakes his head, almost in disbelief and then finally explains, “That’s a good sign.  I wasn’t sure if you were going to stay the night or not.”

“Well of course I’m going to stay the night!” I reply.  I wouldn’t drive all this way to break up him!

Not that the thought didn’t cross my mind—it did—but after sleeping on it, I realized I’d rather be with him than without him.  And once I realized that, the next logical thought was to go to him, to discuss this rationally.  As adults.

I plant myself on the sofa while he runs through the shower and while I’m waiting, I stumble upon the last thirty minutes of The Julie/Julia Project on TV.  Within seconds, I’m bawling my eyes out.  Julia Childs, you see, followed her husband to Paris; she had nothing to do at first but eventually she carved out a brand new life for herself, plus a book deal!  I could do that!

Then again it was Paris, not the New Jersey suburbs, and I can’t even imagine trying to truss a duck or whatever it was that go blogger Julie Powell so darn excited about Mastering the Art of French Cooking but either way, I’m feeling better.  We’ll work something out.

We grab an order of empanadas from the Colombian café for dinner and head to the reservoir with a picnic blanket and a cooler full of water bottles that TWD has packed entirely of his own accord.  I know it sounds crazy, but the way I see it, you might as well invest in a proper backdrop if you’re going to have a difficult conversation.

And my God is this conversation difficult.

And I tell TWD everything that I wrote in Wednesday’s post, even though he’s already read it and most of the accompanying comments.  I tell him I can’t believe he’s simply accepted the fact that some stupid memo is going to dictate the rest of his life—the rest of our lives together— and how I feel like I’m being asked to give up everything simply because I’m not the one who has kids and a mortgage and job with good benefits.

We don’t come to agreement; we barely come to a resolution, but eventually we reach a point where everything that needs to be said has been said and we decide to call it a night.

In fact, if I have to hear one more time how taking a train to work will result in the loss of his hard-earned parking pass, I really will lose my mind.

But I can live with this, at least for now.  Especially because he called me Thursday morning and told me that the state does grant a limited number of exemptions.  One point for Philadelphia!

Granted, it’s not about points.  Or about wins and losses.  We’re both stubborn, and we’re both pretty heavily invested in the lives we’re currently leading.  It’s taken me years to reach a point at which Philadelphia finally feels like home, at which I’m not constantly bemoaning my departure from London and wishing I was somewhere else.  Let’s face it: I’m not 22 and just out of college anymore and neither is he.  We both have lives.

Maybe our reluctance to budge—to sacrifice—means we don’t love each other enough.  Maybe it means we’re not meant to be together.  Or maybe—just maybe—it means we need to be patient and hope (as all good Quakers do) that [the] way will eventually open.

So here’s to me trying to be a good Quaker today.  And (while I’m at it) to remembering that our first date was only a year ago…

10 Responses to “Compromise? Well, it Sucks…”