I am officially old.  I know this because on Day #1 of our cruise to Bermuda, The Wedding Date and I plunked ourselves down on a pair of deck chairs and spent the entire morning observing the behavior of a group of teenagers to our left. 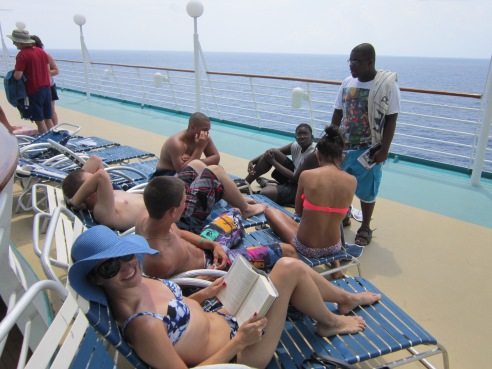 Our subjects (and me in the foreground “reading” my book)

And I was appalled.

In the center was a scantily clad brunette of about sixteen.  She was wearing a bright orange bikini from Victoria’s Secret and had acquired an entourage of six male suitors.

At first I was impressed—we’d only been on the ship for a matter of hours!—but as I watched the boys fawning all over her, I realized they were all a bunch of idiots.  I mean, let’s do the math: 6 guys + 1 girl = at least 5 rather disappointed suitors.

Under the guise of reading our library books, TWD and I spent nearly three hours watching the situation develop.  And thanks to my obnoxiously wide-brimmed hat (not to mentioned TWD’s skill at gossiping in Spanish), they had no idea we were talking about them.

Sure enough, a chunky white kid in board shorts was attempting to elbow his way into the inner sanctum but two seconds later, he was shot down.  This went on again and again and again, like that scene at the beginning of Gone with the Wind at the barbeque at Ashley’s plantation where Scarlett is literally surrounded by a ring of eager young bachelors.

And it’s not as if there weren’t plenty of other teenage girls on the ship.  There were dozens!  Granted, they weren’t slathering themselves with tanning oil or doing things with ice cubes that I would have never dreamed of doing at sixteen, but I still wanted to smack them all upside the head and shout “Get a grip!  Go find a nice girl who isn’t headed for a career in pole dancing.  Or better yet, stop guzzling soda, hit the gym, and go read a book!”

There was one particularly awkward boy who nobody seemed to like very much (including Miss Orange Bikini herself; she mimed blowing her own brains out when he arrived on deck).  He was extremely earnest, and kept asking us if we’d seen “his friends” every time we ran into him.  I felt sorry for the kid.

“He needs help,” I kept telling The Wedding Date.  “She is so bitchy.  I was never like that.  I should talk to him.”

“But they’re all so mean to him!  Do you think it would help if I started flirting with him?”

“Maybe I can ask him to get me some lemonade?  Maybe she’ll get jealous?”

We watched for a while longer and even though TWD wouldn’t let me give the boys a helpful dose of big-sisterly advice, he kept looking around for the girl’s father.

“I’d be swattin’ those boys away with a newspaper if that was my daughter!” he said. “Or worse!”

“You wouldn’t have to,” I replied.  “Our daughter wouldn’t act that way.”

“Because I would raise her differently!”

We had ourselves a nice little nature vs. nurture debate until the girl’s father arrived.  He surveyed the scene, told Miss Orange Bikini he was going to lunch and simply walked away without so much as raising an eyebrow.

And that was that.

When we got up to leave, TWD thanked the kids for all of the “amusement” they’d provided over the course of the morning.

Only then did one of the more astute amongst them ask, “Wait a minute—we’re you laughing at us this whole time?”

I just smiled innocently and buried my face beneath my hat once more.

(Note to self: must wear wide brimmed hats more often.)

We saw them again a few hours later.  They’d gotten kicked out of one of the hot tubs.  (Are we surprised?)  I know I enjoyed my fair share of ridiculous behavior when I was that age but I’m pretty sure I was nowhere’s near that bad.  I mean what is up with kids nowadays?

8 Responses to “Anthropology on Deck 10”