The Wedding Date and I are currently in Bermuda– sans internet— but don’t worry.  I wrote the following last week so you’d have a little something to tide you over until we get back.

I’m at my favorite coffee shop, and even though I love the drinks, love the ambiance and love the music, I hate the clientele.  My ideal coffee shop, actually, would be a private coffee shop (I believe most people call these “offices”) but until I land a book deal, publish a best seller and make enough money to purchase my dream home in Queen Village (I have it already picked out, in case you were wondering), I’m stuck here.

Fortunately, I love people watching.  In fact, if people watching was an Olympic Sport, I could give Phelps a run for his money.  But it’s not, so I’m left to hone my craft on days such as these.

Next up is couple two tables away in the throes of some sort of emotional crisis.

I can’t tell if they’re breaking up or making up—they’re just out of earshot—but they’re old.  Like way too old to be having this sort of conversation in a coffee shop.  I broke up in a coffee shop once (the experience totally ruined Starbucks peppermint lattes for me, by the way) but I had just graduated from college.  It’s okay to break up in a coffee shop when you’re 21 and don’t know any better and you don’t care who sees you sitting there with tears streaming down your face.

But these people are like my parents’ age.  And the woman is way better looking than the man.  He is obviously aware of this because he’s practically sitting on top of her: chair turned sideways, arms around her neck, and lips—yes lips—all over her.

She’s been staring out the window for most of their conversation but just a few minutes ago, she finally deigned to kiss him back and the exchange lasted for 15 seconds.

And yes, I decided to write a blog post about it because I was so appalled.

And now they’re at it again.

With tongue this time.

It’s all I can to do to keep from shouting “Get a room!”   I mean it’s not even noon for crying out loud!  The Wedding Date and I are pretty kissy but we’re not nearly this bad, at least not in public, not at one o’clock in the afternoon at a coffee shop in broad daylight.

Together, so I guess whatever crisis promulgated their display has been averted (or simply swept under the rug until next time).  I guess I’ll never know. 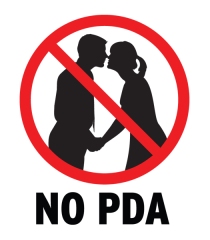 So, let’s talk about PDAs.  I think this is probably the worst I’ve ever seen (aside from the two guys going at it in Miami, just visible from the roof deck of our hotel, and they didn’t realize they were in public view so that doesn’t really count).  How about you?