We’re lounging on the beach in Dingman’s Ferry covertly sipping wine, sangria and various rum concoctions from our water bottles when my friend suddenly announces that there’s a snake in the water.

Experienced naturalist that I am, I run up to the water’s edge with my camera and sure enough, there’s a snake: 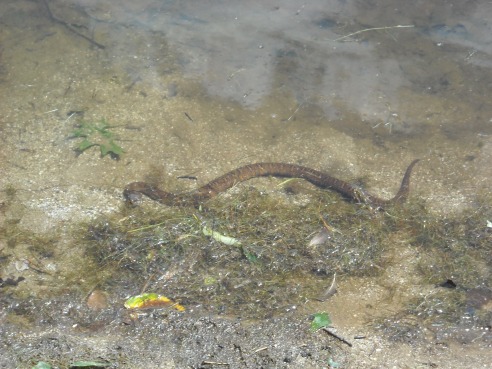 “Come rescue it!” I shout to The Wedding Date.  “You can just tap it on the head to see if it bites, like you did with the turtle.”

He promptly informs me that he’s a turtle whisperer, not a snake charmer, which in turn prompts my friend’s fiancé to announce that it’s a copperhead.  And that copperheads are perfectly good swimmers.  And that their venom is also poisonous.

So we go back to our “water” bottles and our paperbacks and take bets on the survival of two middle aged women paddling backward across the lake in a rickety rubber boat.  But they make it—albeit rather haphazardly—so we find ourselves in need of another form of amusement: paddle boarding.

I didn’t even know what paddle boarding was until my friend’s fiancé pulled one of the paddles from the canoe and headed over to an abandoned oversized surfboard lying on the sand.  But paddle boarding is almost as cool as extreme kayaking, and seeing as the water was basically riddled with venomous snakes, there was the added thrill of potentially plummeting to one’s death.

We started out cautiously:

And then things got a little crazy: 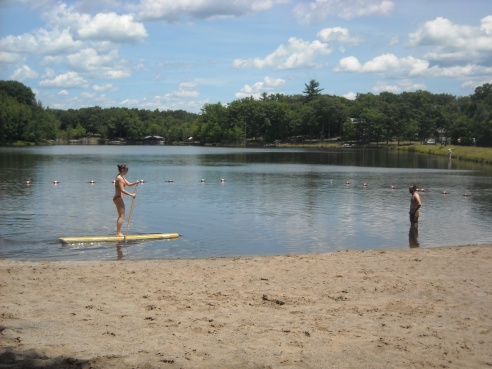 Finally, I decided to give it a try.  And The Wedding Date filmed.  Unfortunately I’m having trouble uploading the footage so you’ll just have to believe me when I say that if paddle boarding was an Olympic sport, I’d totally be headed to London next month.

11 Responses to “Swimming with Snakes in the Poconos”