Well folks, I’ve survived my first television appearance.  It wasn’t nearly as glamorous as I’d hoped it would be (the security folks didn’t even want to let me in because my name as its appears on my driver’s license didn’t match my name as it appeared on the guest list) but I did get to see the set of Saturday Night Live and I had a nice chat with Tina Fey in the green room.

Actually, one of those last statements was a lie.  I did not have a nice chat with Tina Fey in the green room; in fact I didn’t even get to go to the green room.  Upon my arrival, I was instead shown to an ancient, circa 1960 restroom located somewhere in the bowels of the IT department where I was left to perform a full makeover in approximately three minutes and three feet of closet space.  Who knew?

Now that the shoot’s over with, I’ll stop being so cryptic about everything (apologies for my less-than-full-disclosure on this one, but I’ve been afraid to jinx it).  Essentially, I received an email from a producer a few weeks ago inviting me to come to New York for an interview for an upcoming documentary on online dating.  It’s scheduled to air sometime in February so once I know when and where, I will be sure to let you know.

Now, let’s get back to my love life, shall we?

You may recall that The Wedding Date agreed to accompany me to a friend’s dinner party on Saturday night.  As such, I found myself with a rather extensive “To Do” list Saturday morning:

Clean the guestroom (just in case)

Clean my room (just in case)

Clean my bathroom (just in case)

Figure out what to wear to dinner party

Figure out how to get to dinner party

Now, I’d like you to take a look at the following picture. 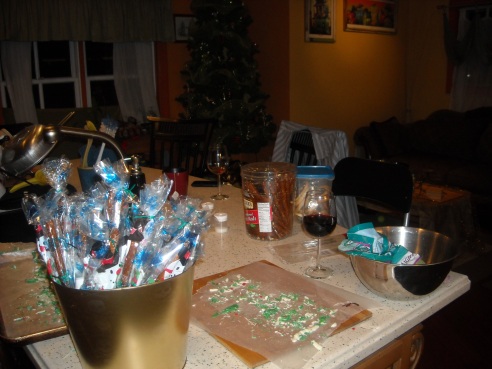 Note the men’s dress shirt casually draped over the back of the bar stool amidst all of the chocolate.

Note that this picture was taking on Sunday evening and not Saturday, even though The Wedding Date was supposed to go home Sunday  morning…

(And although you won’t get this from the picture, I should add that I woke up at 5:45 this morning and was, until just a few minutes ago, busily preparing eggs-n-bacon with caramelized onions for two.)

Unfortunately, co-ed sleepovers make for rather unpleasant Monday morning’s so you’ll have to wait until tomorrow for the next installment (I know, I know, I’m a terrible person, but trust me: any man who is willing to spend a Sunday afternoon watching Love Actually whilst helping his lady-friend wrap eighty gazillion chocolate covered pretzels in their politically correct “winter holiday” bags is worth the wait).