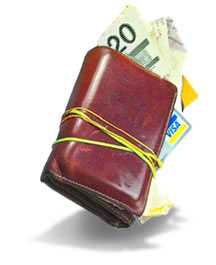 I'm not this bad-- I mean, I don't use rubberbands, but you get the picture...

Despite having spent yesterday listing the reasons why America should not have declared its independence from Great Britain, I think it’s time for this particular American to do just that.

(Except for the food; I still don’t get the fascination with fish-n-chips or mushy peas but perhaps they’re an acquired taste.)

Nonetheless, I’ve been back in Philadelphia for nineteen months now.  A full year and a half—and until yesterday I was still carrying around my NHS card, my Wandsworth Library card, my Café Nero Loyalty Card and my T-Mobile pay-as-you-go top-up card.  The mobile phone belonging to said card was in the top drawer of my desk, along with my passport, my US/UK electric converter, a map of the London Underground and envelope full of British Pounds and Euros, ready to go at a moment’s notice.

No wonder I could never find my stapler.  Or my sticky tabs or all of those normal things that ought to occupy the top drawer of one’s desk.

No wonder my wallet weighs approximately seven pounds—and no wonder I found myself sans debit card the last time I went to the health food shop on 4th Street: I’d left my wallet at home because it was too heavy and even though I thought I’d grabbed my debit card before I left, I hadn’t.

I used to spend hours (and I do mean hours) lying on my bed and sobbing about the injustices of the UK Boarder Control.  I spent months agonizing over the visa renewal process but in the end, I never even bothered to submit an application.  Who knows why—I’ve long since given up trying to answer such questions—but it would seem that it’s time to buy a new wallet and get a move on with this life, on this side of the pond.

Because seriously, who wants to be that girl who spends all her time lamenting London?  And more importantly, who wants to listen to her? (Or lug around her ton-of-bricks wallet?)  Not me.

I could have stayed in London.

I could have returned for my PhD by now.

But for some reason, I’m still in Philadelphia with no immediate plans to leave.  In fact, I’m getting further and further entrenched and loathe though I am to admit this, there are days when I am almost… happy.

4 Responses to “Independence of a Different Sort”