I'm the fourth girl from the left... obviously.

I have issues with Victoria’s Secret.  Seriously.  I can’t tell you how many times I’ve attempted to purchase myself a decent bra only to stumble out of the store bewildered and empty handed twenty minutes later wondering why I even bothered to venture from the outlet mall clearance rack in the first place.

I’ve been doing this for years.  It all began during a prospective student overnight at Goucher College during my senior year of high school.  I was the prospective student and my host, eager to dazzle me with the cultural offerings of suburban Baltimore, took me to Victoria’s Secret at the Towson Town Center.

I tried to buy a bra—all of the college girls were buying bras (or attempting to slip thongs into their shopping bags)—but I couldn’t bear the thought of asking a sales associate to direct me to the 36 NAs.

(Thought “A” cups were the smallest?  Think again.)

Nor could I stomach the price.  $49.50 for a bra?  Seriously?  No wonder shoplifting seemed to be the method of choice.

A few years later, I was forced to spend $12.99 on a bra but this was an emergency situation involving the urgent procurement of a strapless bra for a friend’s wedding; ordinarily, ten bucks is my limit.  (Which is probably why my cleavage insists on looking so completely fabulous all the time…)

I’ve been coveting proper undergarments for years but every time I muster the courage to walk into a Victoria’s Secret, I balk at the prices and run away before one of the sales associates can reel me in with their ubiquitous measuring tapes.  (I can just picture them whispering into their headsets “We’ve got a 36 NA in aisle seven.  I repeat: 36 NA!  All associates, please stand by…)

Yesterday, en route to Happy Hour a production meeting with my co-producer, however, I decided to give it one last shoot.

You’re 25!  I tell myself.  You work hard.  You’re two days away from the end of the school year (and the arrival of Date #7… not that you’re buying sexy underwear for his sake) and if you want to blow half of this week’s paycheck on the Low-Back Multi-Way Bra with Gel Curve, that’s your prerogative.

Of course on the way to Victoria’s Secret, I run into a homeless girl huddled in the shade behind one of the bus stops on Market Street.  She looks about my age and the minute I see her, I feel G-U-I-L-T-Y.  How can I spend $50 bucks on a bra when the girl at the bus stop doesn’t appear to have any clean underwear in her possession, let alone a home in which to store said underwear?

I pick up the pace, hoping I’ll forget about her if I walk fast enough, but I can’t focus—and the purchase of my very first Victoria’s Secret bra is going to require guilt-free focus.  Fortunately there’s a Walgreen’s on the corner.  I duck inside, select a water bottle from the cooler and spend the next ten minutes wandering around trying to think what sort of nourishment I’d want if I was a homeless person.  I take a pass on the beef jerky (she might be vegetarian) steer clear of the chocolate (it will melt in the heat) and finally decide on a variety pack of granola bars—even if she has nut allergies, she’ll be able eat the other flavors.  Plus granola bars are light weight so she can take them with her and this particular brand looks pretty healthy.

By the time I reach Victoria’s Secret, I’m way behind schedule and I still feel slightly guilty about the girl sitting by the bus stop (I should have given her a second bus token…) but karma works in mysterious ways: it’s the semi-annual sale!  The sales lady is the very picture of discretion when she takes my measurements, although for once I wish she would broadcast the results to the rest of the shoppers because—get this!—I’ve lost weight and gained a cup size!  Woohoo! 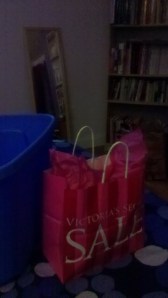 Granted, she was measuring over the generously padded bra I was already wearing but who am I to complain when the gods of lingerie decide to smile down upon me?

I think I’m going to have to start buying food for the homeless more often.

And go back to Victoria’s Secret.