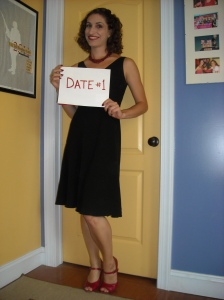 Earlier this week, I finished “The Science of Single” by Rachel Machacek.  This means I’m nearly back on track with my a-book-a-week initiative but more importantly, I think I’ve cracked the code.

(Except perhaps for a confident man who likes to cook, cooks well and grates cheese on his own abdominals.)

But getting back to my theory: aside from a few months of angsting over Date #17, I kind of forgot to analyze the results of my experiment.  Had I made the proper calculations (or whatever it is that real scientists do) I would have discovered the following:

I was at an all-time confidence HIGH when I met the Man from Marshalls.  I mean seriously, what’s the likelihood of meeting a single, gorgeous man in the checkout line of a crappy home goods store in South Philadelphia?  I’d never done something like that before, and the fact that I managed, through little more than eye contact and a few well-timed smiles, to get him to stop on his way out of the parking lot, offer me a ride to Target and ask me out on date would suggest that I was operating on some sort of higher playing field.

The Man from Marshalls remains, without a doubt, the best looking Philadelphian I’ve ever dated.  He was tall, with gorgeous blue eyes, a fantastic smile and when we weren’t arguing politics (and even when we were, come to think of it) we had great physical chemistry.

I managed to pull off my fantastic coup at the checkout counter because I was feeling confident.  Heck, I’d gone out with fifteen different guys at that point and while the majority of my dates left much to be desired, the rest made me feel smart and sophisticated and sexy.  This is why, when I met Date #17 for the first time, I walked straight into the restaurant, recognized my date as the best looking man at the bar and resisted the urge to go running in the opposite direction for fear that I wouldn’t measure up.  He was wearing an expensive suit, with patent leather shoes, drinking red wine and oozing the sort of “Hey babe, I’ve got this” confidence that I’d found so appealing in Date #4.

Thinking back, there were a lot of red flags during that first date that I chose to ignore (he placed his hand on my knee within approximately three minutes of introducing himself, ordered appetizers he didn’t touch and made a rather big production of breaking a hundred dollar bill in order to tip the coat check girl… I’m all for making a good first impression but come on now, do you mean to tell me that you regularly carry hundred dollar bills in your wallet but had nary a single?)

Nonetheless, our relationship worked well in the beginning in part, I think, because I was still sort-of-seeing the Man from Marshalls.  By dating two men simultaneously, I didn’t have the time or mental energy to project all of my Jane Austen fantasies onto either of them (at least not to the extent that I usually do).  The result?  I kept my cool.  It wasn’t until I finally said my goodbyes to the Man from Marshalls and began focusing exclusively on Date #17 that his red flags became harder to ignore and our relationship began to sour.

Moral of the story?  In order to find a man worth keeping around for a while, I need to be confident.   And in order to be confident, I need to keep dating (or publish a best-seller/obtain my PhD, but I think dating will be quickest short-term solution).

Last but not least, in order to keep dating, I need to go back on Match.com.  So buckle your seatbelts, ladies and gentlemen; it’s time for Round #2!

8 Responses to “Did I Learn ANYTHING from My Experiment? Yes, Actually…”