Starting tomorrow, I will have approximately one hundred children under my care for the duration of the school year.  Although “After I Quit My Day Job” would suggest that I’m able to sustain myself solely though my writing, this is not exactly the case.  I have student loans, and I have to pay my own health insurance and while the cost of living in London far outweighed the cost of living in Philadelphia, the American approach to education and health care far outweighs my income as a freelance writer. 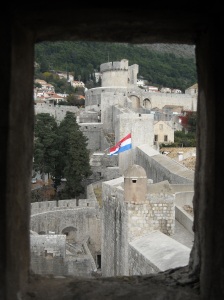 The thought of full time employment makes me want to slit my wrists.  Sure, a real job would give me an excuse to wear cute outfits every day, but it would completely cramp my laptop-and-coffee-shop style.  I don’t do nine to five.  I’m too creative.  (This afternoon’s outfit, for example, features items from New York, China and Venice-via-a-flea-market in New Jersey.)  I’m also too European.  (Time for a siesta?  Woohoo!)  Finally I’m too… I’m just too damn busy dating, which brings me back to my original point.

I’ve been teaching dance for ten years now and although my students this fall will range in age from 3 to 18, the majority of them are adolescent girls.  They’re going through that Reviving Ophelia phase that all teens and pre-teens go through.  They’re experimenting with eye liner for the first time.  They’re starting to notice boys, and they’re starting to realize that being smart and outspoken isn’t quite as “cool” as it used to be.  Worst of all, they’re starting to hallucinate when they look in the mirrors that line the front walls of the studios; they’re starting to see things like fat and flab and curly hair that simply must be straightened.

I take my role as a role model very seriously.  I don’t smoke.  I don’t do drugs.  I have a zero tolerance policy for eating disorders.  I encourage my high school-aged students to go to college.  I never engage in public displays of affection with any of the boyfriends I’ve dragged to the recitals and competitions over the years and I like to think that I set a good example for my students.  (Granted, the students are never invited to the post-recital “dinners” at T.G.I. Friday’s, during which my old boss and her husband used to treat the entire staff to their first round of frozen daiquiris, but if they were, they would find that their beloved “Miss Kat” never drinks and drives.)

So how I do I reconcile being a role model with my current experiment?  How can I tell my students that there are more important things in life than boys and eyeliner and high heels when my nightly escapades would suggest the opposite?

And those are only my dance students.  I also teach First Day School, during which I’m supposed to be imparting Quaker values to an entire generation of impressionable young Friends.  Last year, one of the other First Day School teachers made a construction paper sign to hang in the corner of the classroom.  It depicts the “Quaker Spices” as follows:

I’m a rather bad Quaker as far as the “Spices” are concerned.  It took me a year to even realize that the construction paper sign in the Friends Meeting House was actually an acrostic, and even while I was typing it just now, I forgot the word for “C” and had to Google it.  I like to think that I’m doing pretty well with the letters “P” “I” “C” “E,” and I’m okay with the final “S” too, but I can’t figure out how “Simplicity” fits in with my great dating experiment.

I devised a list of rules to keep myself on the straight and narrow when I first started.

3)      No kissing Match.com men.  (Rule broken thanks to… actually on second thought, I’ll leave you to your own devises here.  You can guess, and I’ll give you a hint: there’s more than one possible answer.)

Somewhere along the way, I decided to revise Rule 3: No kissing Match.com men on a first date.  I was feeling rather virtuous about this amendment.  I was beginning to think that I’d be setting a good example for my students once again (“Date as many men as you want girls, and kiss however many you like, just make sure they take you out to dinner at least twice first!”) but then I went ahead and broke that rule too.

(And no, although you can probably guess, I’m not going to tell you when or with whom.  I will say only that I’m not at all sorry.  And that I’m seeing him again soon.)

I had hoped to reach some sort of Zen-like state of bliss while writing this post but spiritual enlightenment currently eludes me.  Could be because I’m drinking coffee and eating baklava and… oh yes, contemplating what dress to wear for my upcoming second date with a certain someone.

10 Responses to “A Quaker Serial Dater?”