When I was a senior in college I took a class in post-9/11 immigration policy. It was my first class in the political science department and I loved the professor.

I was firmly entrenched in hating President Bush back then, having been severely disappointed by the results of the first election in which I had finally been old enough to cast my vote. (Somewhere on a floppy disc is a photo of me and my college roommate running around our dorm with Kerry/Edwards lawn signs on our heads.) At one point I asked the professor, “But why do I have to accept Bush’s presidency? I didn’t vote for him. I shouldn’t have to listen to him.”

It was then that I was introduced to the idea of how popular sovereignty (rule by the people) actually works. My professor explained that actually yes, I did have to accept Bush’s presidency because I lived in a democracy. Power lies with the people, but the people transfer that power to someone else (i.e. their elected officials) in order to have a functioning government and society.

Implicit in the act of voting, he explained, was the pledge to accept the outcome of the election. To trust the system, regardless of the results.

My 20-year old self said “okay.” I wasn’t happy about it but I did it anyway because that is how America works.

We have a broken system, as has been proven time and time again: the money in politics thanks to Citizens United (the senate race that just wrapped up here in PA was the most expensive in history), the two-party system, the electoral college, the entirely asinine way in which primaries are conducted, the countless acts of voter suppression that are overlooked by pundits and talking heads in favor of the ever-present but completely unfounded specter of “voter fraud,” the prevalence of gerrymandering, the super delegate system, the fact that Election Day still isn’t a national holiday (even though Columbus Day is…) and don’t even get me started on the media.

So maybe it’s time, America. Maybe it’s time for the proverbial shit to really hit the fan and then perhaps we’ll finally wake up.

Because what was the alternative in this case? Even if Clinton had won the presidency, a democratic victory in the Senate was unlikely. She would have been faced with four years of partisan politics and Republican obstructionism (not to mention a wide swath of the country who never could get theirs heads around the idea of a female president, just as they couldn’t get their heads around the idea of black man in the White House); it’s unlikely that she would have won reelection and unlikely that she would have been able to deliver upon any of her promises.

This, it seems, is what rock bottom looks like. And although things are going to a whole lot worse before they get better, maybe we’re finally going to realize that the American way of life– from our reliance upon fossil fuels and our reluctance to address climate change, to our continued inability to admit, let alone grapple with the fact that racism is alive and well here in the USA– is unsustainable.

I say this, of course, from a position of privilege. As a cis-gender presumably white, non-Muslim, non-immigrant female, I won’t be the first to go.

I won’t be directly effected by the “total and complete shut down on Muslims” or the infamous wall.

I won’t have to worry about the repeal of Roe vs. Wade or the loss of my reproductive rights because my husband and I want to have a baby and we’re in a position, at this point in our lives, to provide for that child.

I won’t have to worry about losing my healthcare because my husband works in the healthcare industry; we would have found a way to get by somehow.

I won’t have to worry that my marriage, a traditional heteronormative union, would be invalidated.

I won’t have to worry that I’d get deported.

But eventually, as Martin Niemöller warned us back in the days of Adolf Hitler, they would have come for me, and for all of us. 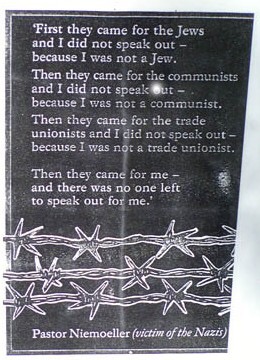 So when we talk about healing our nation and reaching across the aisle and listening to the other side today, what are we really saying?

Sure, we can blame the democrats for taking certain voting blocks for granted, or, as comedian Bill Maher is so fond of doing, for alienating the working classes with their politically correct liberal elitism.

But we’ve been pussyfooting around for the past 18 months, too unwilling to admit that yes, racism does exist in this country and no, the fact that we elected a black man to be our president doesn’t erase this fact. We stood by when Trump called Mexicans rapists, when he mocked a handicapped reporter, when he didn’t bother to denounce an endorsement from the KKK. The majority of our republican leaders didn’t speak up until “their women” had been threatened by the implications of Trump’s Access Hollywood scandal and by then it was, of course, too late.

As a professor myself, I just finished teaching my students about the idea of popular sovereignty. I nagged them every week to register to vote and even promised leftover Halloween candy (“the good stuff, guys”) if they showed up in class with those seemingly ubiquitous “I voted” stickers.

I had imagined today’s post would be about the feelings of sisterhood I experienced throughout Election Day, about wearing my pantsuit to the polls and pushing the button for a woman. I came home from work feeling so elated that I told my husband, only half in jest, that we should make a baby- then and there- instead of waiting another 6 months like we’ve been planning.

Because wouldn’t that be something? To conceive a child, possibly a daughter, on the night that our nation made history? When we voted a woman into office and stood up against the wave of hatred and fear exemplified by the Brexit vote and the very thought of a Trump presidency?

But this morning I woke up, checked the final results on my phone and said to my husband, “We can’t bring a child into this world. How could we?”

This is not a time for healing. This is not a time to accept and rationalize and normalize. This is a time to stand up and say, NO. Not my President. Not my country. Because even though many of us, myself included, won’t be the first victims of the Trump purge, our sisters and brothers will be. And because we are the United States of America, this isn’t just about us. The world is watching.

Will we be on the right side of history or will we become victims of the broken American dream?

7 Responses to “For all the Broken Hearted Americans: Maybe it was time to break?”