Usually, after a few weeks off in the middle of August each summer, I find myself chomping at the bit to get back into the classroom. Sure, I complete the requisite (and highly conspicuous) humble brags on Facebook, “complaining” about having to update my syllabi when I could be spending the day at the beach, but like most of my colleagues, I love to teach and I can’t wait to meet my newest crop of cultural anthropology students.

This year, though, despite having taken off longer than usual (due to back surgery, a wedding and- oh yeah- our honeymoon) I’m wasn’t so excited. This year I was actually a bit terrified. Why? Well, because Donald Trump happened while I was away over the summer- and in becoming the Republican presidential nominee has not only unleashed but also legitimized an onslaught of racism, bigotry, misogyny, xenophobia and anti-intellectual zeal- and I didn’t know how I was going to deal with that. 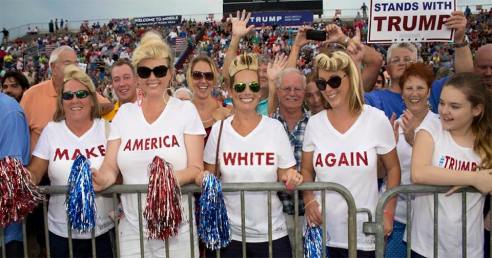 You’ve gotta hope this a joke… like they’re being ironic to make a point?

I usually do a pretty good job of keeping politics outside of the classroom. By which I mean my personal political views; politics in general are, of course, fair game, and comprise the majority of our in class discussions because let’s face it: just about ever facet of 21st-century life has become politicized.

We talk about every topic under the sun. Last year I even added Ta’Nehisi Coates “The Case for Slave Reparations” to the syllabus. I nearly had a revolt on my hands, not just on account of the seemingly incomprehensible subject matter but the length of the article (“Seriously professor? It’s like 40 pages… And I never had any slaves. I didn’t even live back then. So why should I have to pay?”)

But I still manage, for the most part, to keep my personal political views out of the classroom. The smart ones eventually guess, or I’ll accidentally out myself by using my heavily-stickered iPad mini to log attendance while they’re watching a film, but I’ll still have one student at the end of each semester who comes up to me and says, “You’re so infuriating, you’re always playing devils advocate and I can never figure you out!”

(This, of course, is one of the many occupational hazards that come along with being an ethnically ambiguous, female, relatively young, and if my end-of-the-semester evaluations are to be believed, marginally attractive adjunct professor with- and I quote here- “pretty hair.” My students are forever trying to “figure me out.” I took to wearing a fake engagement ring long before I’d met my husband just to avoid the potential horror stories I’d heard from more experienced colleagues.)

I met a group of college students while canvassing in New Hampshire for the Sanders campaign earlier this year. They’d made the 8-hour bus ride from their plush NJ campus to frozen New England at the advice of one of their professors, a longtime activist I’d met while still in high school.

I envied her ability to send half a dozen of her students north, knowing that as an adjunct, I didn’t have that liberty: my personal political views have to stay out of the classroom because my job depends, in no small part, upon my student evaluations and a good 30% of them lose their minds and accuse me of being an atheist each semester when I mention that we are going to discuss the theory (emphasis mine, to keep the fundamentalist Christians among them from fleeing the scene before the conversation has even begun…) of human evolution.

So I hide my personal political views to keep my job. And while this is certainly not the most courageous path, I have made peace with this (at least for the time being) because if I lose my job, that’s approximately 75 students each semester (or 150 each year) who won’t be plunked back out into the world at the end of each final exam knowing, at the very least, who Ta’Nahesi Coates is.

But I’m not sure how much longer I can keep my shut, especially in a world where this has become normal: