It’s common knowledge (or so I thought) that when you’re planning a bit of good ol’ fashioned political subterfuge, you’ve got to divvy up your resources. Take Steve McQueen and The Great Escape, for example. They didn’t just dig one tunnel to escape from the Nazi POW camp. No. They dug three: “Tom,” “Dick,” and “Harry” because they knew there was a chance they’d get caught, but with three tunnels underway, the loss of one, or even two, would still leave them with one final shot at freedom.
It was thus informed that I found myself hissing to a Bernie delegate from one of the Southwestern states on the final night of the DNC.

“Divvy them up!” I whispered.

“What?” He looked confused.

“The signs. Divvy them up.”

He’d just received a whole stack of “unauthorized signs” from the California delegation that read “Love is Love” and “Walk the Walk” and from my vantage point on the edge of the aisle, I knew they wouldn’t last long.

A few minutes earlier, another California delegate had come by with a small, hand written list of coordinated chants and the specific times at which they were scheduled to begin. “Watch California,” she whispered, “Follow our lead.” I nodded discreetly, trying not to draw attention to myself as I snapped a quick photo with my iPhone and shared it with the small number of Pennsylvania delegates I knew could be trusted.

But the floor monitors were closing in, confiscating unauthorized signs right and left. “Down with Oligarchy” didn’t stand a chance. And even though the floor monitors scratched their heads at “Intersectionality Matters,” they took them too in the end.

“Seriously,” I hissed again. “You need to break that stack up, now. If you go down, we all go down, but if you…”

It was too late.

“Hand ’em over,” one of the floor monitors said. And with that, the entire stack was gone, all 20 or 30 signs. I don’t think they were even given the decency of a proper burial in the recycling bin.

Shaking my head, I muttered to myself, “This is why they built three tunnels.”

I didn’t want to miss the night that Hillary Clinton accepted the nomination. I didn’t want to be a sore loser. I didn’t want to have to a face some future grandchild interviewing me for an oral history project and have to say, “Well sweetheart, no. I’m afraid Grandma can’t tell you what it was like the night that a woman first accepted the nomination of a major political party because Grandma wasn’t there. Grandma, you see, was a delegate for Bernie Sanders, and Grandma was too angry.”

So I went. I wasn’t happy about it but I went. And aside from my hat, I didn’t even wear anything crazy, just a pair of khaki pants and a “professional” looking blouse from White House Black Market (by way of the thrift shop, of course).

Many of us were still in shock, and I certainly don’t mean to denigrate or downplay the experiences of people who’ve gone through far, far worse by suggesting that my time at the DNC was in anyway as traumatic as what others have experienced (#firstworldproblems much?), but I honestly felt just completely lost.

Even though I knew that Senator Sanders had to do what he did, and even though I was proud of the party’s platform for being the most progressive in history, I felt, as did many other delegates, that our leader had abandoned us.

Who were going to look to now?

Who was going to tell us what to do?

I wasn’t angry at him, but I was, to quote one of my favorite former preschool students, “sad at him.” Not because he had any other choice really, but because it felt like he’d left us, and not only that but he told us to vote for her.

This short clip called “Healing the Berned” (which features an actual Philly delegate) is meant to be satire of course, but it wasn’t all that far off from how many of us were feeling:

I cut my activist teeth on A.N.S.W.E.R. (Act Now to Stop War and End Racism) and CodePink during my senior year of high school. By my senior year of college, I’d organized a small band of slightly-less-apathetic-than-average students to spend the culmination of their spring breaks in Washington DC at a march in protest of America’s invasion of Iraq. I even convinced my then-boyfriend to come along.

He didn’t have a political bone in his body but was shocked by everything he learned that weekend. “We have to tell someone,” he exclaimed as we headed back to our hotel to thaw out after the march. “People need to know what is going on!”

“No sh*t, Sherlock!” I wanted to shout. “Where the hell have you been for the past four years?”

But I learned a thing or two that weekend as well, and even though I was only ever marginally involved with CodePink (and even then, only by way of my mother’s coattails), those women had mastered the art of political subterfuge and I, the little glue-gun wielding 21 year old, took notice.

By Day #4 of the DNC, I was ready. Not only had I already set up an impressive crafting station in our hotel room but before heading down to the Wells Fargo Center that afternoon, I’d folded a Bernie Sanders lawn sign into a tiny little wad and taped it inside the pillbox of my hat.

My mom was volunteering again that day and I’d arranged to meet her inside the arena because she’d retrieved my lumbar support pillow and the Percocet that I’d accidentally left at my house the night before.

“Great hat!” she said when she saw me.

“Look INSIDE the pillbox.”

After a few moments of utter confusion, a knowing smile spread across her face.

“And that’s not all,” I informed her: I also managed to get a role of tape, 2 huge permanent markers, several sheets of Bernie stickers, some card stock, a million bobby pins and even a few jumbo clips through security. My friend Kitty, seated a few rows behind me, had duct tape. And my friend Amanda had a whole stack of extra paper.

Within about fifteen minutes, we’d set up a veritable sign-making factory, spread across three rows of Bernie delegates. Those seated on the inside did the dirty work, grabbing their markers the minute the floor monitors turned their backs, while those of us on the outside kept watch. 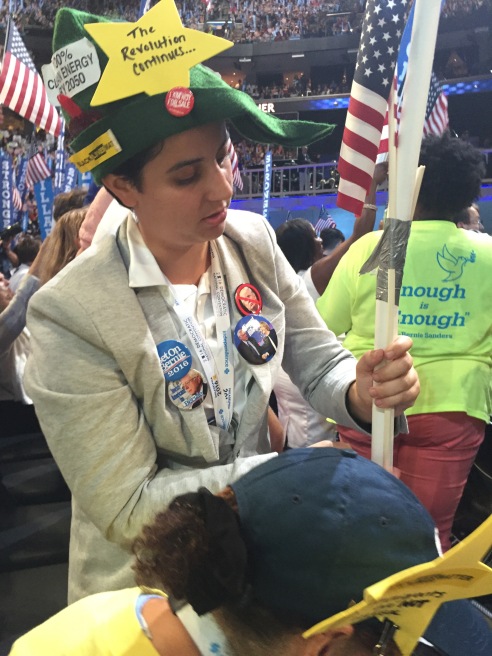 For every sign that got confiscated, we made at least two more– which is why you shouldn’t f*ck with an Medusa comprised of Bernie delegates– and I dare say, we would’ve made Steve McQueen proud. The standard issue USA placard got turned into Bernie’s trademark slogan “Not Me, Us.” Hillary’s logo became a peace sign. Cardboard tubes dissected from signs we were meant to wave became struts to take our signs even higher than the others and the wooden dowels from our American flags provided the necessary structural support. 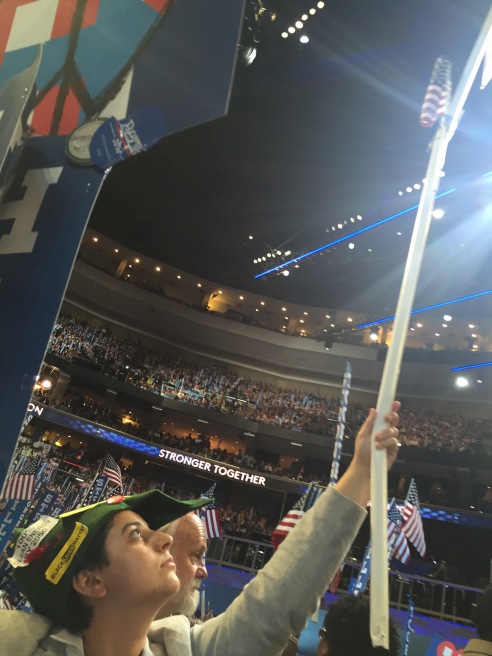 I’d managed to hide one of the “Walk the Walk” signs from the California delegation before the entire stack got taken and as I sat there in my wheelchair holding it, one of the floor monitors shoved a USA sign into the arms of a man a few rows in front of me and told him to block me. (And no, I’m not making this up.) I unfurled my Bernie lawn sign, stood up, and held it aloft, folding it back up and tucking it safely into my bra just before the floor monitor turned around.

“Try me!” a tiny voice was shouting in my head. “Just you f*cking try me! You wanna pull a sign out from the bra of a nicely dressed white girl who is seated in a wheelchair??? When we’ve all got our cameras ready to go? Be my guest. The internet will EAT. THIS. UP.”

(And no, the ironies of white privilege are not lost on me here. In the last training I went to on the subject, however, we were told to stop feeling guilty and start figuring out how to leverage our assets to do something. And yes, unfortunately, appearing ethnically ambiguous but presumably “Caucasian” is still something of an asset in this country.)

Last night, having decided to postpone my official birthday dinner to this weekend, my husband and I met up with one of my DNC roommates and her husband.

“How are you feeling?” I asked.

It was strange to see her outside of the DNC, in the real world. That entire week, which seemed so important and so all-consuming at the time, which left me wondering how my other friends could be rehearsing for various performances when this was going on (didn’t they know how important this was???) was beginning to sting a bit less and I was beginning to laugh a bit more.

Our husbands joked that they needed therapy just for having been married to us during that week. We swapped stories about normal things: pets, in laws, siblings, wedding planning, our favorite hiking trails in the Wissahickon as life, it turns out, goes on. 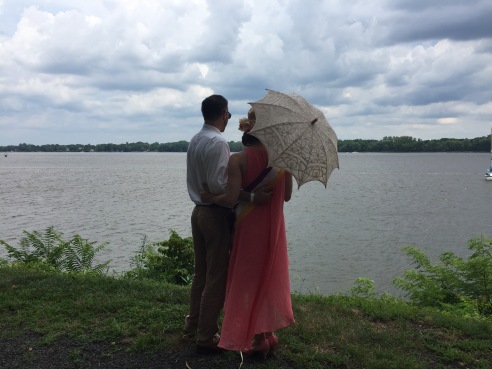 “Did you get the email from Bernie?” I asked at the end of the night, “The one about the watch party on August 24th?”

“We’re gonna host a party,” I informed her, “so if you don’t find one closer to your place, sign up for ours.”

And so, my future grandchild, what was it like to be there that night?

You’re sure your recorder is on? Good.

It was infuriating. And inspiring. And oh the balloons. So. Many. Balloons. You would’ve loved the them but, poor Grandma was in a wheelchair and couldn’t get out and they were piled almost up to her neck at one point.

But she had an epiphany that night.

Yes, epiphany is a big word. But you are one-quarter Puerto Rican! You should know what it means because we celebrate Three Kings Day, or Epiphany, on January 6th each year, and you get extra presents from the Wise Men, just like the ones they brought to Baby Jesus. It’s to celebrate (hold on a second, I have to Google this real quick to make sure I’m getting it right) “the manifestation of Christ to the Gentiles as represented by the Magi, Matthew 2:1–12.”

So “epiphany” means when something becomes manifest, when you realize something, something important, and after a few hours of sitting there making signs, and joining in the chants that kept rising up from the California delegation, your grandma finally realized that she’d been turning her head to the left every fifteen or twenty minutes, from Pennsylvania, over Arkansas, up to California, waiting for the signal, following their lead.

We were, just as the hashtags said, the change we had been waiting for.

16 Responses to “Grandma, where were you the night Hillary Clinton got the nomination?”