So far, I’ve painted a pretty grim picture of the Democratic National Convention. But the DNC wasn’t all doom and gloom. In fact, as frustrating, heart breaking and infuriating as it was at times, it was also one of the most intense, exciting and awe-inspiring weeks of my life.

Did you catch the moment when Larry Sanders (Bernie’s brother) spoke on behalf of Democrats Abroad during the roll call? I saw it live from the convention floor, have watched the clip at least half a dozen times since then and it still makes me cry:

Then there were the hundreds and hundreds of demonstrators who lined the fence outside of the Wells Fargo Center each day, cheering for us Bernie delegates as we cheered for them. It was a non-stop love fest: “Thaaaaank you for being heeeere!” shouted from inside the fence, then “THANK YOUUUU for being heeeere!” shouted back from the outside. It went on and on until I almost walked into a tree because I wasn’t looking where I was going and found myself saying to my husband, some three hours later, “Can we go to BJs tonight and buy Popsicles for all of the demonstrators?” (To which he, ever the pragmatist, replied, “All of them? How are we going to give them out? No you can’t just ‘put them in your rolling shopping cart with a bunch of ice packs and walk around FDR Park for a few hours’ because the Popsicles will melt and you’re not even allowed to pull a shopping cart right now.”)

There’s a joke among Quakers that you shouldn’t make any major, life altering decisions for at least 48 hours after attending a Young Adult Friends retreat, because if you do, you run the risk of being all, “I’m going to give my clothes to the poor, sell my house, and join the Peace Corps!” without pausing to think if any of these things, however noble, are actually feasible or, perhaps more important than feasibility (in fact, fuck feasibility!), if they’re the best use of your passions talents.

Well, the same can be said about attending the Democratic National Convention as a first time delegate. You’ve got cameras in your face every five minutes, people cheering for you, people yelling at you, and hours-upon-hours of sometimes amazing (and sometimes not so amazing) speakers preaching, more or less, to a very enthusiastic choir of nearly 20,000 people. It’s infectious. You find yourself thinking, “Hmmm… maybe I should run for office.”

And when this happens, you need to take a few minutes to decompress and regroup, or, in the case of those occupying a certain room at the Doubletree, a few hours…

And those hours need to involve a bottle of wine (or 2), some craft supplies, various bouts of interpretive dance and, if you’re lucky, a Hillary Clinton cardboard cut out. 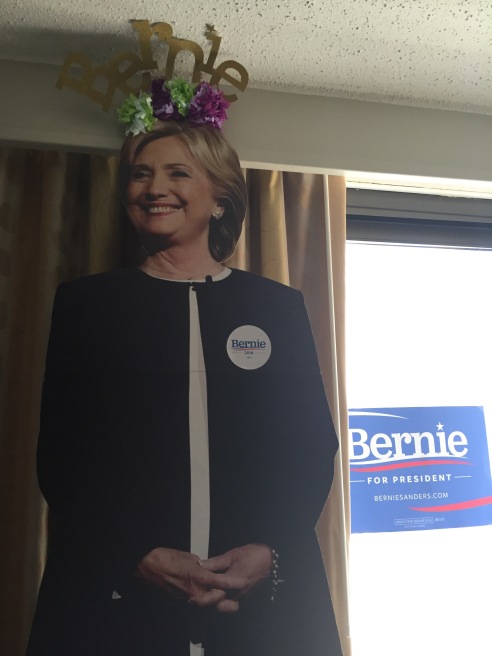 Because I live only a few blocks from both the Wells Fargo and the Broad Street subway line, my initial plan, when I found that I’d been selected as a delegate halfway through our honeymoon, was to commute from home each day of the convention. Each state had been assigned a hotel (Pennsylvania sharing, in this case, with South Caroline and Louisiana) and even though I have nothing personal against the Doubletree, I do take slight issue with the fact that conventions such as the DNC engender enormous price gauging, to the tune of $2,100 per room (of which the DNC is rumored to skim $200 off the top…) so, no thank you, I said, I’ll stay at my own house because I live in Philadelphia.

This, however, was not allowed. At first, we were “strongly encouraged” to stay at the hotel because it would be “more convenient.” Then we were “required” because credentials would be issued each at breakfast each morning and with so many people descending upon the city, there was “no guarantee” that the mass transit system would be able to keep up and if we didn’t get our credentials, we wouldn’t be allowed in…

I, along with a handful of other Philly delegates, resisted. But they (both the campaign and the state party) kept pressuring us: emails, meetings, conference calls, “special exemption request forms,” one-on-one phone calls and new requirements, including not only the hotel stay but also a requisite fundraising page set up by each delegate.

“I don’t want to waste time fundraising just so I can stay in a swanky hotel all week,” I told one coordinator who called to give me the hard sell a few days after we returned from our honeymoon, “I’d rather tell people to donate directly to Bernie’s campaign.”

His response? Fund raising was non-negotiable. Everyone had to do it. (Welcome to politics, right?)

“Your district voted you in,” he told me, “you’re their voice, and they should support you so that you don’t have to incur any personal expenses paying for meals and lodging while you’re at the DNC.” I didn’t have the heart to tell him that everyone in my district who had voted for me (and was likely to donate) had also just been at my wedding, and there was no way I was going to go back asking for seconds.

But finally I caved for fear of being denied my credentials and set up my fundraising page. I found three roommates with which to split the exorbitant cost and promised my donors that I’d give any excess funds to those delegates who actually needed them, like, you know, the college students, the retirees or the ones who had to fly from Alaska to cast their vote for Bernie…

A few days before the convention, we found out that the campaign would make up the difference for any delegate who hadn’t raised enough to cover the cost of their room (so, for example, in my case, I raised $300-something but my portion of the room came to $525 so they’d cut a check for the extra $200). We also heard that none of the Hillary delegates had to pay a cent for their rooms, because her SuperPACs funded everything for them. I don’t know if this is true or not (and for the sake of “party unity,” resisted the urge to kidnap a Hillary delegate in order to find out) but suffice it to say, there was a lot of resentment on my part and those of the other delegates from Philadelphia about being made to stay at the hotel.

Especially because the shuttle bus drivers had been instructed to take delegates on a “scenic route” in order to show out-of-towners “the sites” on their way to and from the Convention Center where the daily caucuses were held. Which is why, in case you’re wondering, it took us 45 minutes to get there from the Doubletree because first we had to drive by the Philadelphia Museum of Art…

If you’re familiar with the geography of our fair city, you’ll recognize this as complete lunacy; if not, you’ll just have to take my word for it. After the first 20 minutes, I wanted to shout, “But I’ve already been to the art museum! I’ve been there like a hundred times! I’m a member! I got proposed to there!!! I would have just walked to the Convention Center if I hadn’t had back surgery last week!!!!!!!” But alas, though there were only two of us even on the shuttle bus in the first place, which is a lesson in (in)efficiency in and of itself, we had to take the scenic route through our own damn city.

It was however, the hotel room and my 3-sometimes-4 roommates that enabled me to come back from the I-need-my-black-hat brink and get down to business.

By which I of course mean the choreographing and recording of copious Bernie Sanders Interpretive Dance videos. Not being able to dance myself, I assumed the roll of director (“Start on the bed. Yes, look depressed. Put your head down. Now– JUMP! Jump onto the window ledge!!!”) The other 30-something in the room took the roll of star dancer, flinging open the curtains to our corner-room windows to reveal a plethora of Bernie Sanders signs reigning high above Broad Street, all the while pounding her fists and shouting, “Wake up, people! WAKE UP!”

The recording of our masterpiece was left to the two twenty-somethings in the room, who, kept trying to explain to us 30-somethings that the audio-visual drug of choice for younger millennials is Vine, and that Vine only allows you record short clips, so we had to interpret our love for Bernie Sanders (and our simultaneous loathing for The Evil One) in 10-second intervals, which really hampers the creative process.

But we did it.

Unfortunately, being a college professor and all, I had the good sense to inform those still in college that these videos– these “Vines” or whatever they’re called– were NOT to be shared, that they were intended for private, personal therapeutic use only. And that even though one of us had successfully stolen the Hillary cardboard cut out from right outside the hotel in broad daylight thanks to my brilliant coaching (“You’re wearing a blazer, just walk confidently and no one will stop you!”), that we would not deface her in any way except to add a small and tasteful Bernie Sanders sticker to her lapel. Because, you know, RESPECT, people.

We’re not Republicans, after all.