I wrote but never published the following post as my last relationship was falling apart last winter.

A few weeks ago, we got into a fight about going sledding.  (I wanted to go; he refused.) It wasn’t actually a fight per se—we’ve never had a real fight—but it made me realize, for better or worse, that he is who he is and I am who I am and that there are going to be times when who he isn’t able (or willing) to fulfill my every need.

And then it hit me: I didn’t have anyone else to go sledding with.

And that wasn’t his problem; it was mine.

It is so easy now, looking back, to see where we went wrong. It was the first time I’d been in a relationship in which my boyfriend also happened to be my best friend.  And 90% of the time, he did everything that I would have wanted my boyfriend/best friend to do but 10% of the time, I was on my own.

I went to a retreat with some YAFs during one of those 10% times (YAFs being Young Adult Friends, aka Quaker Youth Group for grownups). It was mid January, there was snow on the ground and even though I’d let the majority of my friendships wither away in the face of my relationship, I found a few brave souls who were willing to come sledding with me. Unbeknownst to me, the sled I’d salvaged from a pile on my parents’ roof deck had been out in the sun all summer so the plastic was in a state of deterioration long before we hit the first hill.

Halfway through my first run, it began to disintegrate, first one of the handles, then a hunk of blue plastic the size of my head.  After half an hour, the poor sled finally split in two and I had to trek up and down the hill to collect the remains before depositing the entire pile into a garbage can.

It was the silliest, most ridiculous sledding experience of my life.

It was also the most fun I’d had in months.

A few days later, the Dark Ages began (the break up, the depression, the subsequent soul searching and eventual rising from the metaphorical ashes). I built a new life. I bought a house. I salvaged old friendships and cultivated new ones. I made myself happy.

And then, right one cue, the icing on the cake entered the picture.

As PIC and I head into the fourth month of our relationship, we find ourselves going to BJs a lot. He is obsessed with BJs and although I don’t quite share his enthusiasm for all things container store, I enjoy tagging along because he lets me ride in the cart. I feel a bit ridiculous, to be sitting in a shopping cart at the official age of Almost Thirty, especially because he sometimes takes a turn too quickly or pretends we’re going to crash, but it’s usually late at night and I’m feeling a bit punchy anyway so I sit there in my bombardier hat and laugh my head off as the other shoppers shake their heads. 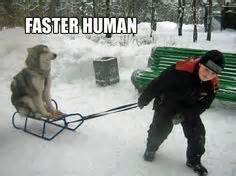 At BJs they sell this absurd little children’s sled that looks like a boogie board and has a husky puppy printed on the front with its tongue sticking out. It always makes me squeal, and during one of his secret shopping trips, PIC bought the sled and hid it in my bed.

Sometimes I have to pinch myself. Sometimes I think this can’t possibly be real.

When he suggests, therefore, the morning after Valentine’s Day that we take the sled for a spin, I feel the need to ask, “Are you sure you want to go out? It’s so cold.”

“Yes,” he replies, kissing me for the millionth time. “It will make you happy.”

And he’s right: it will. But really, it will just make me more happy, and that is the best gift of all.

6 Responses to “The Case of the Broken Sled (or, a Surprise in My Bed)”