Okay, okay, I shall stop teasing you all. Here at last is the story of the flowers behind my front door, but we must start, as all good stories start, at the beginning.

It was today. Exactly one year ago. When my world (or so I thought) cracked in two.

It was today that a young father-of-two from New Jersey called his even younger (and even unhappier) girlfriend from Philadelphia and gave them both the freedom they so desperately needed.

It would take her months to see it that way, and she would spend many of these months drinking too much, crying herself to sleep and watching Breaking Bad until the wee hours of the morning but eventually time, that ancient mover of things and mender of hearts, did what everyone promised it would do.

She realized, after the initial wailing gave way to enlightenment (as it always does if you quiet down long enough), that there were things that they could have never fixed, but things that she herself could have fixed and so she set out to make these things right.

The first moments were difficult, embarrassing. She’d neglected her friends and found that they were now few and far between. But she made amends, reconnected with old acquaintances and found new circles.

She slept with other men (easy enough), danced with other men (somewhat harder) and received a promotion at work. She finished writing her first novel. She bought a house. She painted her new office a cheery golden yellow, sent away for a new passport and realized, as she headed to the airport, that she was happy.  She had been happy before, at times, but never like this.  Never so deeply, never so consistently.

And the happiness kept growing. It would bubble up at the strangest of times: overlooking a lake in El Salvador, listening to her community college students give their final presentations, debating the finer points of interior design with her younger brother (a new home owner himself), slowing down to listen to hear the music in Rittenhouse Square, drinking cider at the Harbor Park, dancing with her friends in tacky outfits at equally tacky nightclubs, eating pancakes with her company before an extra rehearsal…

And even though there were plenty of bumps, plenty of hurdles, plenty of little setbacks and disappointments, the overwhelming feeling was one of joy.

And so, when she boarded the bus to Center City, in her newly re-heeled boots and thrift shop cap in late November, she didn’t really care how things would go down at the Steven Starr restaurant he had selected, because she was happy without him, and would continue to be, whether things worked out between them or not. 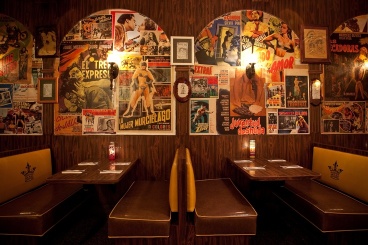 (And those of you who know, those of you have been there, might recognize that it is precisely these sorts of conditions, this sort of self-reliant nonchalance that provides such frighteningly fertile ground- ground fertile enough for flowers to grow.)

3 Responses to “The Story Begins”