Several years ago, back when I was taking my work as a writer a bit more seriously, I went to a conference for travel bloggers in Denver.

It was my first time ever attending anything of the sort. I didn’t know back then that if the PR folks from an expensive hotel invite you to dinner at an equally expensive restaurant, they’re going to pick up the tab so you don’t have to sit there like an idiot wondering, “Why aren’t there prices on this menu?” and “Will I look cheap if I just order soup?”

Because of the altitude, I kept getting nose bleeds at the worst possible times was also woefully underprepared in the business card department (I ran out within a few hours of arriving and had to make more business cards using hotel stationary, a pink highlighter and some yellow thread which I used to tie them up into little scrolls.  It was not my proudest moment.) 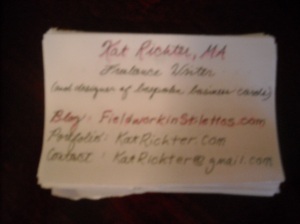 But I did do one slightly brilliant thing while I was there. During the opening night reception, which followed a multiple-gondola ride to the top of fancy ski resort and several glasses of champagne, I introduced myself to two women from the El Salvador tourism board.

Since networking events terrify me, I generally start out with folks who I consider to be easy prey: young women my own age. Of course most young women my own age aren’t terribly well connected, hence the fact that I’m not very successful at networking, but once I’ve gotten a few drinks and a few “practice” conversations under my belt, I eventually find my sea legs and venture forth into the great unknown.

I spent the rest of the conference stalking the editors of glossy travel magazines and rubbing elbows with bloggers whose traffic made Fieldwork in Stilettos look like child’s play. They were forever talking about “sponsorships” and “press trips” and back in my hotel room, I would seethe with envy wondering what exactly a press trip was and how did one get invited?

Well, here’s how. You talk to those seemingly not-very-well-connected tourism board reps. And you give them your business card and if you’re lucky and the stars align in your favor, you will eventually get an email from a higher up at the El Salvador tourism board inviting you on a press trip.

You will tell yourself that you can’t go. You haven’t done any travel writing in years. Those trips are for better, more experienced writers—writers who write for glossy magazines and have fancy cameras and the ever-covered letters “SATW” on their business cards. Plus you’re a college professor. And the director of a growing dance company. You’re producing a show in two months and your students have their midterms coming up. You can’t just up and go for a week in the middle of the fall semester!

There are other anthropology professors, after all, who can cover your classes. And you’ve done a decent enough in setting up your dance company that it can, in fact, function without you. Besides, didn’t you just have yourself a good ol’ come-to-Jesus-moment about how you want to change your life and focus on writing and stop letting your insecurities get in your way? Weren’t you just sitting on your back deck with The European telling yourself you are capable of more?

And then this thing drops in your lap and you’re not going to take it???

It turns out you have to apply for the press trip, but seeing as it’s an all expenses paid, week in a foreign country sort of gig, that seems fair. If you’re a staff writer, you just need a letter from your editor but if you’re a freelancer (like I am) you need at least one assignment letter, which is essentially someone in the great wide world of publishing saying yes, they will publish what you will write about El Salvador.

You also need a passport. I am ashamed to say that I somehow lost my passport over a year ago when my ex-boyfriend and I returned from our cruise. I didn’t bother to replace because I wasn’t going anywhere. (Umm… I’m sorry. What???)

So I cut a rather hefty check to the US Postal Service for an expedited passport renewal and email one of my old editors. We’re supposed to pitch our stories to the interns but a little voice in my head tells me, “Kat, this is not a time to follow the rules. Go straight to the top. He’ll remember you.” And he does. And he agrees to a 3-part series on El Salvador. Evidently my writing does not suck.