Last month, The European and I took our first road trip together. We both like Frank Lloyd Wright so we decided to drive out to Fallingwater in Mill Run, Pennsylvania for a tour.  (Those of who who’ve been reading for a while may recall that this was not my first trip to Fallingwater but given how things went down the last time, I figured it would be good to make some new memories.)

Road trips tell you a lot about a person. Especially when you tack on a Savion Glover concert at Longwood Gardens the night before and a backyard bonfire the night after… 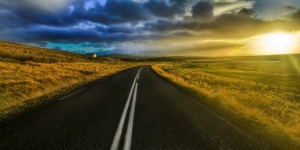 We’re in the motel, watching HGTV so I can “get ideas” for my house and drinking cheap white wine, when he kisses my forehead and tells me I’m “an enigma.”

“Not that that’s a bad thing,” he assures me. “It’s very intriguing. But you are an enigma all the same.”

“Well so are you,” I tell him. “But really, I’m not all that complicated.”

“You are,” he insists. “You’re a dancer, you’re a writer, a blogger, a college professor. Which is it?”

This is not the first time he’s asked me this sort of question. He asked me on our first date and was shocked when I told him that actually I want to be a novelist.  Since that night, he has kept on asking me in slightly different ways, hoping perhaps to get a more conclusive answer, or at least one that makes sense.

As usual, I deflect. I tell him about Katherine Dunham, the famed 20th-centry dancer/anthropologist/writer who was also an educator and an activist and spent her whole life with one foot in each camp. She is very hot in academic circles right now (even though the powers-that-be ignored her academic work for years) because she was doing things like reflexive writing and ethnographic fiction and practice-as-research long before they were in vogue. And she did it as an African American woman, during a time when few women (and even fewer African American women) even went to college.

And I tell the European as much.

I am too young to be this tired.

And over the next few days, as we cross the state and drive back again, the truth starts to come out.

I don’t take days off. Ever.  I can’t remember the last time I met a friend for coffee that wasn’t somehow work-related.  I see couples sitting at little outdoor cafes, or girlfriends gossiping over lattes and I literally want to punch them.

I’m tired of directing a dance company.  I never even wanted direct a dance company in the first place.  I just wanted to dance.  And now I don’t even like dancing because I’m too stressed out about administrative stuff.

I’m tired all the time.

I never have time to write any more.

And even though my life is interesting and people look at me and think, “Wow, she’s got her shit together!” I don’t actually like my life.

It gets me thinking. Could I make a change? Could I do something differently?  Could I start over somehow?