It’s midnight or so, just after last week’s fireworks, and I’m on the roof deck with my brother, The European and my friend Casey, who I met when we interned together at a Quaker magazine.

“How long has it been since you’ve talked to your agent?” Casey asks.

And I have to think about it. “A while… probably six months.” It’s actually been more but I’m too embarrassed to admit this. I mean I have an agent and I’m squandering it. Who does that???

“How much do you have left to write?” The European asks.

He nods. He understands. He does a fair amount of writing himself. But the next day, as I replay our conversation, I feel like a loser.

The only reason I can’t finish my novel while I’m buying a house is because I’m telling myself I can’t.

So I pour myself a cup of tea, sit down at my desk and write. The next morning, I do the same thing and suddenly, just before noon, I’m done. There’s a fair amount of cursing and scribbling out and getting up to go water my plants and get more coffee. There are long walks and yoga and even a ballet class but I’m not a moron, I know how to write. Plus I have some pretty fabulous readers who have given me some pretty fabulous suggestions and after I implement a few of them (especially yours, Laurie), everything just falls into place and it’s finished.

It’s not perfect, but it’s finished. 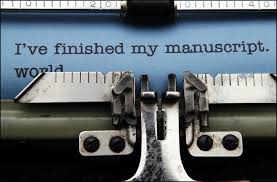 Old Kat would have texted The European right away. But New Kat doesn’t. Instead, I text six of my closest and/or most literarily-inclined girlfriends to say, “OMG, I’m finally done. Will any of you read it???”

I then shoot off a rather humble email to my agent: “Sorry for dropping off the face of the earth and all but I have a new manuscript… It needs editing but when it’s ready, will you read it?”

She says yes. Yes of course.

The first response I receive is from my college roommate, Aliza. Aliza and I didn’t get along terribly well when we were roommates. In fact, I’m pretty sure we both spent the majority of our freshmen years wanting to kill each other. But now that we’re A) no long 18 years old and B) no longer living together, we have an awesome relationship and I am really glad to have her in my life.

She says she’d loved to read it, but only if I promise to still love her when I get her comments.

I tell her of course I will. After all, I can open myself up to criticism and actually become a novelist or I can spend the rest of my burying manuscripts deep in the recesses of my computer for fear that they might not be any good.

I choose the former.

Eventually The European texts back with his congratulations. “I hope you’re going out to celebrate tonight!”

And I am. And not with him. And that’s okay. That’s great actually. I’m going to Happy Hour with one my girlfriends because I am still very much on my “cultivate your own happiness” kick and part of my secret to success is to diversify my portfolio instead of relying on one person— especially one man—to “complete” me.

And you know what? I can honestly say I have never been happier.

Yeah, the house stress sucks, and yeah I am sick of wearing the same clothes over and over because I’ve already packed everything else and I’m tired of not sleeping and waking up at three o’clock in the morning to worry about things that aren’t even within my control…

But I am happy.

I can’t honestly remember the last time I was this happy.

(And yeah, it probably doesn’t hurt that the European and I are going away for the weekend together, but I would be okay even if we weren’t. He’s just the icing on top of a cake that is already, even without him, becoming quite lovely.)

9 Responses to “The End, The Beginning”