The astute amongst you might have realized that I’ve returned from the Bahamas only to leave Philadelphia again without so much as a word here at Fieldwork in Stilettos.  That’s because… well, there’s lots of reasons really, but let’s just say stuff is bound to come up when you spend an entire week on a cruise ship with your boyfriend and his entire family. 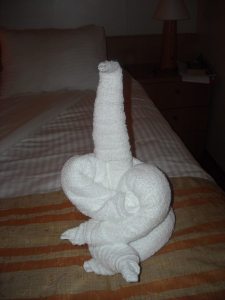 We had a great time.  Really.  I read three books, studied for the GREs (more on that later) and ate approximately 6,000 calories every day, including made-to-order arugula and prosciutto pizzas for lunch.  The ship had mini golf, a water slide and a gorgeous grown-ups only retreat complete with double wide deck chairs and hammocks.  TWD and I challenged his kids to a chicken fight at the beach in Florida and they challenged us to a rematch once we hit Nassau.   I honestly cannot remember the last time I laughed so hard.  TWD even got me to sing karaoke after three glasses on wine on the final formal night of cruise.

But after that, things went downhill.  And not just because I’m a horrible singer.

I would drive to his house while he was at work, take my things and leave my key.

I would write a quick note to each of his kids to say goodbye and wish them a good school year.

I would throw away his toothbrush and bury the bobble head Game of Thrones doll he got me for Valentine’s Day deep in my closet.

And then, somehow, I would pick up the pieces and move forward, not knowing whether or not I’d ever find another man who makes me laugh and likes to dance and is never sarcastic or condescending, even when we’re arguing, which we never actually do…

I kept telling myself not to be rash.  I was, after all, getting my period, and we had, after all, just spent an entire week in a tiny, windowless room aboard a crowded cruise ship.  But the thought of ending things hurt so badly that I just wanted to get it over with: rip the band aid off and drive up in New England for a month to forget about the past two years and start over.

I was trying to decide what to do with the earrings he got me for Christmas when I found it.

But that’s going to have to wait for tomorrow.

4 Responses to “Trouble on the High Seas”