Sometimes being a writer sucks.  I was less than two glasses into my celebratory box-o-sangria when my agent emailed me regarding a new book called “Data, A Love Story: How I Gamed Online Dating to Meet My Match.”  This was not good.  I have a Google Alert set up to keep myself up to date on the latest online dating news and I’d seen something about a woman coming up with some new JDate algorithm but the associated news story was taking too long to load so I filed it away in my folder of “Things to Blog About” and got back to revising my book proposal.

But this wasn’t just some woman coming up with some new algorithm—this was an author called Amy Webb and her book published less than 24 hours after I signed with my agent.  Cue the inevitable meltdown. 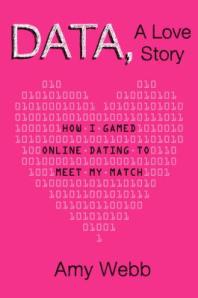 It’s hard enough to get published as a first-time author.  It’s even harder when you think someone else has beaten you to the punch, complete with an “experimental digital outreach plan” that includes a nifty website and an official movie trailer.  I was fairly certain that my life was over but I decided to watch the trailer before jumping to any conclusions.  That’s when things got really bad.

So not only did Webb tell the story that I wanted to tell but she used my city to do it.  (And seeing as she high-tailed it out of Philadelphia as quickly as she could upon the successful conclusion of her project, I feel perfectly justified in claiming the City of Brotherly Love as my own.  Because I love it, despite my continued fascination with all things British.  And even though her first date with the man who was to eventually become her husband took place at the Franklin Institute, I still live in the city that houses the Franklin Institute.  So there.)

At any rate, I decided that I needed to read the book.  I also did some research and found out that her story took place in 2005.  What was I doing in 2005?  Right: I was still in college.  As an undergrad.  I was actually studying abroad at the time, and online dating wasn’t even a blip on the radar for me.  So I decided to forgive Webb for publishing a good book before I got the chance to publish a good book (after all, it’s not her fault that she’s older than me).  I then fired off a quick email to her agent to request a review copy for my blog and got down to work.

The premise—as much as it pains me to admit this—is intriguing.  Webb is a journalist-cum-consultant with a talent for math, languages and musical instruments (interestingly, I excel at none of these things, which might explain why our methods for “cracking the code” were so vastly different, but I’ll get to that later).

After getting dumped by her live in boyfriend, she logs onto JDate but has limited success until an ill-fated date with a married man, a bottle of wine and an entire pack of cigarettes inspire her to log onto to JDate as a man in order to size up her competition.

At this point in her story, my bloggers side said, “Cool!” (possibly because I’ve been watching a lot of Burn Notice these days) but my anthropologist side said, “Really?  That’s your plan?  To pose a man—ten men, actually—and dupe these poor women into thinking their corresponding with someone real just so learn how to conduct yourself like one of the ‘popular girls’?”  I know my manthropological methods weren’t always the most scientifically sound, but I never set out to mislead anyone and I always honest about my experiment, even when it cost me the affections of people I rather liked at the time.

I’ll say this for Webb though: she is nothing if not thorough in her research.  She divides her days into 20-minute units, writes a Mary Poppins-esque wish list of 72 traits she’d like to find in a man and devises a points-based system based on her most important criteria to rank her potential suitors.

(And I thought my spreadsheet was a bit much.)

She also tracks how long the “popular” girls she hopes to emulate take to get in touch.

“Each time someone clicked on or messaged one of my male profiles,” she writes, “I’d start a timesheet, nothing lots of different granular attributes.  What time of day was it best to send an email?  How often did successful daters send messages?  How long did it take for them to respond?”

Her calculations and charts (all of which are fully detailed in the book) were starting to make my head hurt.

My biggest objection to Webb’s methodology was that she started collecting data on other women in order to improve her own chances.  (“I’d use these profiles to collect data and to learn from the women with whom I would soon interact.  Then I could build a super profile—a sort of amalgam of the popular girls and my own data.”)  Towards the end of her research, she writes, “They would unwittingly make me over and teach me how to be a popular girl.”

Now, as a fellow curly-haired, “intimidating,” freelancer-type who was never terribly popular in high school, I might have been a bit more sensitive to this than most folks, but it felt to me like she was selling out.

I will say this for Webb: her biological clock was ticking—big time—but instead of just sitting around and waiting for Mr. Right to come and sweep her off of her feet, she decided to do something about it.  I could have done without all of the self-congratulations (“Looking at [our daughter] for the first time, I knew that someday I’d share a great story with her, one about a smart, high-tech heroine…”) and I really don’t thing you need algebraic equations, color-coded and highlighters and flow charts to figure out that yes, nicer pictures are going to make your profile more popular.  But still, she tells a good story.  And if you’re into math, Data, A Love Story is an entertaining (if shocking) glimpse into one woman’s creative approach to finding and bagging the man of her dreams.

Still, I’m more fascinated by the overarching implications of Webb’s work, especially when you consider it in conjunction with Rachel Machecek’s (The Science of Single: One Woman’s Grand Experiment in Modern Dating, Creating Chemistry, and Finding Love, 2011) and Tamara Duricka Johnson’s (31 Dates in 31 Days, 2011).

I know now that I’m not the only person to have taken such drastic measures to jumpstart my love life, but I really don’t think courtship is a matter of quantitative research.  It’s a numbers game to an extent—if you don’t date anybody, you’re not going to meet anybody—but no ammount of number crunching is going to make up for a bad haircut.