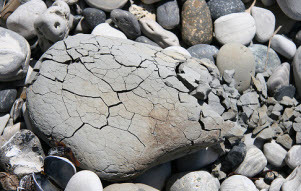 I should note that by “scary,” I also mean exhilarating in a step-up-to-the-plate, “I can do this” sort of way.  For those of you just tuning in, Wednesday’s post was all about how TWD has become my rock over the past few months.  I’ve been feeling rather loserly (if that’s a word) in comparison, not to mention guilty over my “artistic temperament” and emotional outbursts because it’s not fair to have only one rock in a relationship.

And I don’t usually feel like I’m his rock.

He says I am but how can you be somebody’s rock when you’re always running in 63 different directions and crying all the time?

How can you be somebody’s rock when you forget to bring money for tolls?  When your tire blows and you’re left on the side of the highway?

How can you be somebody’s rock when you keep getting rejection letters and you live with your parents and you don’t even own your own car?

But on Friday night something happened.

We were all sitting around the dinner table: me, TWD and his kids playing Lords of Water Deep.  I was winning (someday maybe I’ll be able to beat his mom) but before I could declare victory, his phone rang.

It was his father.

He stepped outside to take the call leaving me alone with the kids.

They were too busy plotting their next moves to notice but as I stared at the board, it all came together.

He’d said something earlier in the day about his grandmother, that she was in the hospital, that his father was worried, that the doctors didn’t know what was wrong and weren’t sure she was strong enough to survive surgery.

I hadn’t thought much of it— she’s been in the hospital before and he didn’t seem too worried— but there he was standing in the backyard in his dress shirt, talking to his father long after everyone else had gone to sleep.

It could only mean one thing.

The moment I realized his grandmother had died, I went into crisis management mode.  I considered prepping his kids for the news, the same way my mother prepped my brother and I when our paternal grandparents died, but I stopped myself: they’re not my kids, and it wasn’t up to me to decide how or when was the best way to tell them.

So I put on my best dance teacher face and politely encouraged them to go get ready for bed and brush their teeth instead so that we’d be able to finish the game as soon as their dad came back inside.

To my great surprise, they actually listened.

I then grabbed a blanket and headed out in the yard to find TWD.  He’d left so quickly that he hadn’t bothered to take his jacket and it was so cold that I’d been wearing my jacket, my mom’s jacket and a fleece hat.

I found him standing in the grass just beyond the back deck.  He was shaking and he kept saying, “Okay” over and over again to his dad.  I wrapped the blanket around him and just stood there, rubbing his shoulders and kissing the side of his face.

I could tell he wasn’t prepared for the news.  No one in his family had ever died before so this was a first for him.   But I’d been through this sort of thing before so for once, I was the rock.

I was the one to wrap my arms around him when we went to bed, and I was the one to tell him everything would be okay.  And even though it was just the beginning of rough few days, it made me realize that TWD and I have something very special.

Who is the rock in your relationship? Your or your partner, or do you take turns?