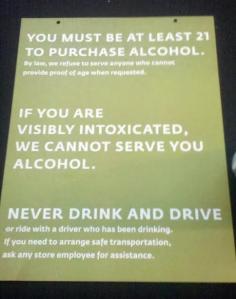 They do warn you at the Flower Show

Sometimes I have normal weeks, by which I mean I can churn out several reasonably coherent (and typo-free) blog posts in addition to everything else I’m supposed to be doing.  This week, however, hasn’t been one of those weeks.  And even though it’s only Wednesday, I’m not terribly optimistic.

Why not?  Well, it’s time for the annual Philadelphia International Flower Show, which means it’s also time for my grandmother to make her annual trek from Toms River, NJ to the City of Brotherly Love in order to celebrate her birthday.

Those of you who’ve been following my exploits for the past year or so may recall what happened at last year’s flower show, but in case you’re just tuning in, here you have it, hot of the press (okay, okay…  lukewarm off the press, and ever-so-slightly recycled but what can I say?  Stories about my grandmother are timeless.)

When I informed the Bovary Reading Bachelor (with whom I went on one and only one date this time last year) of my pre-date plans to join my grandmother at the flower show, he asked “Is your grandmother going to give you a hard time about going on a date?”

In truth, there were at least a dozen things she would have found objectionable about the Bovary Reading Bachelor: his age (he had 13 years on me), his previous marriage, his less-than-perfect church attendance, his love of literature beyond the Bible, and so on and so forth.

Had she known we’d met online, she’d have probably objected to that as well but she has no idea about my blog, my column or the fact that I’ve become something of a serial dater.  And given that she always ends up liking my boyfriends a little too much (as in “I’ve been praying for my granddaughter to meet a nice man,”) I’d rather keep it that way.

My plan was to slip into my heels and slip out to Fork without my grandmother knowing I was going on a date.

As such, I told her “I’m meeting a friend for dinner” while we strolled from the Flower Show’s “Reflections of Notre Dame” to a display inspired by An American in Paris.

“A friend?” she asked hopefully.

“A friend.” I repeated.  (By the way, I could totally work for the FBI.  Aside from the fact that I post the daily trials and tribulations of my love life on the internet, I’m a steel trap.)

Last year, for example, the EMS had to be summoned.

In her defense, my abuela is rather petite—it wasn’t that she was drinking too much wine but rather that she hadn’t been drinking enough water. This was due, in no small part, to the fact that last year’s wine tasting provided nothing but wine.  (I’m talking no water, no nibbles, no chairs, and don’t even get me started on the lack of ventilation in the Convention Center.)

Granted, they tell you to “drink responsibly” at the entrance but strange things happen when you bus thousands of suburban senior citizens to the Flower Show.

This year, to my mother’s great relief, there were water pitchers on every table and despite having been escorted from the wine tasting on a stretcher last year, my abuela was determined to return.

My mom packed an entire bag full of water bottles and granola bars and I made it my duty to escort Abuela from booth to booth.  (Nothin’ like the blind leading the blind.) 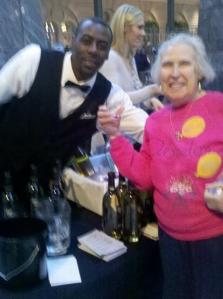 'Buela and the Bar Tender

I spent the majority of the next two hours exchanging Secret Service-style text messages with my dad: “Abuela is on the move.”  “We have visual.”  “EMS standing by.”

“We’re here for the wine!” Trip #2 exclaimed with a flourish of her bejeweled wrist.

Over the next twenty minutes, Trip #2 and I became BFFs, swapping travel stories, relationship woes and drink recommendations.  (What can I say?  My grandmother talks to everyone, my mother talks to everyone and despite the fact that I think they’re both un poco loco in this regard, I tend to follow suit when under the influence.)

“You have to try the Chambord!” I urged my new companion.  “It matches your sweater!”  (See the sort of logic one can dispense with a Masters degree?  The FBI is probably putting together a lucrative employee benefits package for me as we speak.)