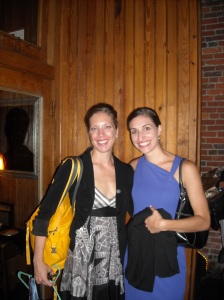 We did it! (And yes, I brought a change of clothes and my Carlos Santana heels for the "after party")

I don’t know what to do with myself now that I’m not emailing my co-producer 63 times a day (I swear, if you took a look at my inbox, you’d think we were having an affair instead of simply directing a show together).

Thirty six hours later, I am finally on the road to recovery (and yes, I do mean recovery.  I had such awful blisters by the end of the band rehearsal that I was literally slicing patches of skin off of my feet with a pair of scissors).  I slept through the night for the first time in approximately two weeks last night and I’ve got to say, it was absolutely heavenly.  Getting up at 4:30 to check my email and then running choreography in my head until 7:00 was starting to lose its appeal…

Well, of course I’m super critical so I could harp on the fact that I totally flubbed the end of our final duet in the first show but seeing as I was wearing only a leotard and fishnets at the time, I doubt anyone was really paying attention to my footwork.

(At least I hope not… if they were, I obviously need to get back to my 10-minute toning regime). 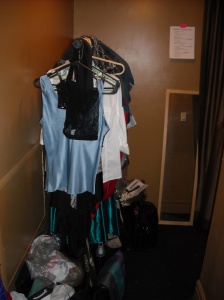 There were, of course, tons of last minute emergencies including flooding (which nearly prevented our videographer, our photographer and our saxophonist from making it to the show), dancers getting lost on their way to the venue, Funsaver ticket reservations, sold out shows, Fringe Festival bullsh*t (their system kept crashing so we couldn’t access our sales reports until after the show), torn costumes and not one, not two, but three changes in venue for our band rehearsal (hence Wednesday afternoon’s meltdown).

But thanks to our fabulous stage manager (a dear friend and fellow Goucher grad), our equally fabulous box office volunteers (ie. Landlord, Chauffer and my co-producer’s mom), our emcee and the fantastic staff at Bistro Romano’s, the show went off without a hitch.  At least the audience seemed to think so, and even though I thought the experience would leave me completely turned off of producing for the rest of my life, I realized that those two semesters of arts administration during my senior year of college (plus a lifetime of having a mom who is hyper organized about everything, not to mention the orchestration of last year’s Preschool Nutcracker Extravaganza) really stood me in good stead.

I had my sh*t together.  At least as together as one can have their sh*t when they’re working with nearly twenty independent artists, out-of-town musicians, a non-traditional venue and an essentially non-existent budget.

Maybe I should have gone for my MA in Arts Administration after all… or maybe I should just continue my trial-and-error approach because I already have a long list of “things I will do differently next time.”

(And yes, this would imply that I am indeed already thinking about producing another show, but between now and then I’ve got a 29-student production number to arrange, choreograph and costume so perhaps its best that I simply pour myself a cup of coffee and get ready for this afternoon’s competition team/faculty meeting.)

As for he who came to my show?  Well, you’ll have to wait until Monday for that one.  Here’s a hint: it was not Date #7.

PS: I totally meant to take dozens of behind-the-scenes photographs for your post-show viewing pleasure but what can I say?  I was slightly preoccupied and only managed four.  We did, however, have the show professionally photographed by the wonderful Brian Mengini and filmed by Tech Support (thanks!!!!) so I’ll be posting footage as it becomes available!  (In the meantime, you can “like” Brian on Facebook for a sneak preview: http://www.facebook.com/brianmenginiphotography)