To his credit, he wore dress shoes this time.  And dress pants, and a dress shirt with a neon green mark across the wrist, presumably left by one of the children he works with and personally, I found this rather endearing.

Also to his credit, he was punctual but not-too-early, therefore giving me just enough time to slip into a new dress and a pair of carefully coordinated pink tights before running downstairs to answer the doorbell.

We went to Beau Monde, which has the most amazing coffee creamer holder (dispenser? container? thingamagig?) that I’ve ever seen: 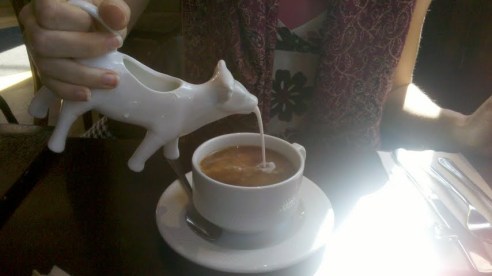 There, we dined on mixed berry and chocolate crepes, which, as you can see, were also quite pretty: 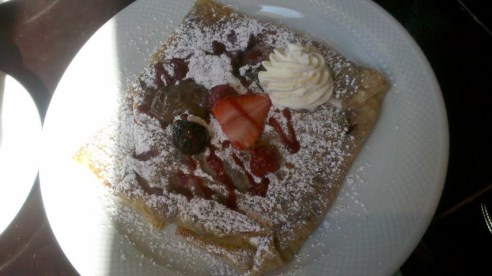 Yes, I've become that girl who takes pictures of EVERYTHING...

After brunch, we strolled leisurely down South Street and I cursed myself for not having had used the restroom at Beau Monde (a cup of chai, a cup of coffee and several glasses of water do not a pleasant stroll make).  Given the unfortunate timing of my dad’s return from the gym, we shared a rather hurried and lackluster goodbye (I didn’t want to subject the poor fellow to the Richter family comedy show again) and that, as they say, was that.

I’m sorry that I have nothing more scandalous to report this morning.  I do, however, have a consolation prize to offer, in the form of another scavenger hunt.  Click here for my recent piece in Skirt! magazine.  I was rather nervous about publishing this one—as most of you have probably noticed by now, I usually stop writing just before I get to the juicy bits— but this should keep you amused for the rest of the weekend.  (Just don’t blame me if you decide to run off to Turkey after reading it…)