You know those guys who are just too good to be true?  They’re gorgeous without making a big show of it, they’re well-dressed, they’re polite and even though they could cruise through life on nothing more than their good looks and charm, they’re actually pursuing a respectable career with just the right amounts of ambition and nonchalance?   I used doubt the very existence of such men (they are the Luke Brandon’s of the world, if you will), and I assumed that if I ever did meet such a man, he’d turn out to be gay or a complete a**hole.

But that was before I went to Sevilla and in Sevilla (at the tender young age of 17), I spent two weeks cohabitating with such a man. 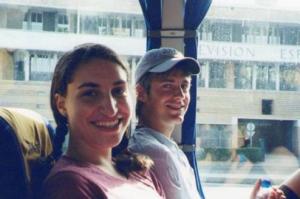 Me at 17 with this week's Single Male Friend

This week’s Single Male Friend has asked me not use his name (turns out he’s more “It’s complicated” than “Single”) but he has allowed me to post a few photos from our time in Spain.  (Note the awesomeness of my frizzy French braids during our day trip to Portugal.)

It’s not nearly as scandalous as it sounds: I was enrolled in a flamenco course and he was enrolled in a nearby language school; we both applied to live with host families through our respective institutions and ended up renting two rooms in the same flat on Calle Peral.

I arrived in Sevilla on a Sunday afternoon.  For those of you unfamiliar with the Andalucian world, Sunday afternoons in Spain have a rather post-apocalyptic feel to them.  This is because weekends are still weekends in Spain, and in addition to the shops closing on Sundays, they also close for the daily siesta.  As such, my procuring something to eat was out of the question.

This is where my new flat mate came in—literally.  I’d flown into Paris, taken an overnight train to Madrid, another train to Sevilla and a cab to my new flat; suffice it to say, I was exhausted.  And hungry.  My new flat mate introduced himself, sent me to bed, told me he’d wake me up in an hour when he’d finished cooking dinner for us and offered to show me around our new neighborhood once we’d eaten.

Even though I had a boyfriend at the time (and kept my resolve not to cheat on him), I was twitterpated.

And have been ever since.  In fact, upon breaking up with said boyfriend a few years later, I sent a Christmas card to my former flat mate, telling him how I felt about him under the guise of having just seen Love Actually (and if you can’t say it at Christmas, when can you?).

He was gracious enough to never mention the card.  And to accept my friend request on Facebook several years hence, and to never remind me of just how dorky I was at seventeen, and to indulge my “anthropological” tendencies in regards to his love life.

Sadly, it’s not nearly as exciting as I’d always imagined it would be.  I figured that with his looks, he’d be a total player and that today’s post would be a variation of that which comprised my Single Male Friend from Norway.

No such luck.  Turns out he’s a one-woman-at-a-time kind of guy and he’s had an on-again-off-again relationship with a woman he met in college for several years.  He’s considering moving across the country to be with her and he thinks that “the greatest feeling is to be able to sit with someone for a longer period of time without saying anything and it not feeling awkward.” 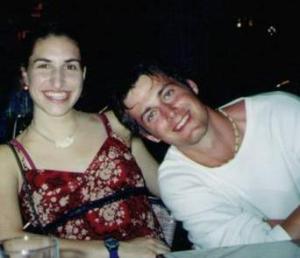 Not quite sure why I was so enamoured of my EMS backpacker watch in those days...

Can somebody please shoot me?  After having harbored a crush on this guy for nine years (mind you, I never saw him again after leaving Sevilla) I would have rather learned that he was a total jerk who treated his girlfriends like crap.  This way it wouldn’t matter that I’d never managed to become one of them.

Now I’m back to believing that there are good looking men out there who are well-dressed, well-mannered, well-traveled and not complete a**holes.  Now I’m hoping that maybe I’ll hit it off with one who’s not already taken (and who doesn’t treat me like a little sister) and hope, when it comes to romance, is invariably tragic.