I’m nearly to the front gate of the Philadelphia Zoo when I get a text from my three o’clock: he’s running late.

This is not good.  Double headers only work if all of the players stick to the schedule and seeing as I’m trying to squeeze in not one but two dates before heading over to University City for a tap class with my students, there is no room for error.

But I decide to play it cool.  He is coming from Wilmington after all (which is an entire state away for all of you international readers) and he’s been considerate enough to tell me he’s late before he’s actually late.  Plus, this gives me time to scope out the gift shop (as a creative movement teacher, I am always looking for new ways to blow my entire paycheck on children’s books).

I stroll through the children’s section, then through the clearance section and finally I head back towards the gate to read about the history of “America’s first zoo.”

Being a proper Philadelphian, I’ve never been to the zoo (only tourists and schoolchildren go to the zoo).  I read all about the zoo’s founding, it’s centennial, it’s role in America’s centennial during Philadelphia’s Centennial International Exhibition and then, because my three o’clock still hasn’t arrived, I read it all again. 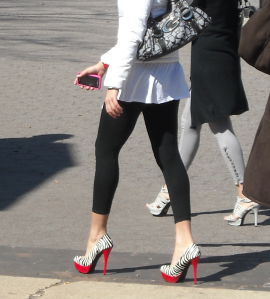 I guess she wanted to match the zebras?

I’d be pissed if not for the fact that A) I like history, B) I manage to snap a photo of a woman sporting the most ridiculous zoo-footwear I’ve ever encountered (see right), and C) I’m already dating two guys in one day.  The way I see it, one loses the right to insist that her dates show up on time when she’s scheduling them back-to-back.

My date finally show’s up at 3:30 (a full half an hour late!) but he apologizes profusely, sweeps me towards the ticket booth and promptly purchases two tickets with his credit card and his military ID.

So yeah, it’s my first date with a man-in-uniform.  Obviously he’s not in uniform at this very moment (he’s finished with his tour) but I’m still not quite sure what to expect.

I know that most girls love a man-in-uniform but I’ve never really shared this particular fixation.  This is probably because I’m a pacifist and think guns are about as sexy as a Tupperware of spoiled tuna fish (plus the Navy boys I met during a weekend trip to Annapolis as an undergrad were completely obnoxious) but I’m trying to keep an open mind—after all, he could have written me off for being a “tree hugger” just as easily as I could have written him off for not being one.  And he hasn’t, at least not yet.

So we start with the usual small talk, I pause every feet to take photographs for my students (I’m planning an entire week of “zoo animal dances”) and before I know it, we’re in the primate house trying to figure out what the monkeys are thinking as they sit there picking mites from one another’s tails.

“Look at the poor guy in the middle all by himself,” I lament.  “He doesn’t have anyone to play with.”

It occurs to me that this would be a good time to address the subject of writing—specifically that of my blog.

As far as I’m concerned, this is enough disclosure for a first date.  But then he flashes me another smile and asks, “So, what number am I?”

“I’ll have to consult my spreadsheet” I stammer, trying to buy myself some time with a little levity because honesty—what’s a girl supposed to say to that?

19 Responses to “My Three O’Clock (The Double Header Continues)”