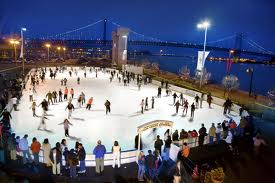 Here’s a tip: if you’re rather touchy about your ice skating skills (or lack thereof in my case), do not agree to hit the rink with a man who just happens to coach ice hockey in his spare time.  It’s not often that my dates leave me feeling completely discombobulated without the benefit of alcohol.  I teach dance for a living!  And I can do just about anything in heels: tap dance, hike, even ride a bike.  Granted, my last biking-in-heels adventure culminated in me trying to extricate my lace-up stilettos from the chains of my bike while balancing on one foot on a rather public street corner in Oxford, but still.

Unfortunately, I’m not nearly as adept in skates as I am in stilettos.

“When was the last time you went skating?” Potential Soul Mate#1 asked as I tottered my way onto the rink last night.

I’m not sure what prompted this question.  Granted, there were toddlers zooming past me but it’s not like I spent the whole time clinging to the wall.  “When I was in London,” I replied, discreetly flailing my arms for balance.  Fortunately, the occasion in question took place with the undergrad I was dating/not dating during my first semester of grad school and he was every bit as lame on ice as Yours Truly.

PSM#1 is an entirely different matter.  Not only does he coach high school ice hockey, but he played all through college and owns a pair of custom skates that cost probably as much (if not more) than my K360s.

“I never wear my skates at public rinks,” he informed me.  “They don’t resurface the ice often enough and the blades get all messed up.”

“That must be my problem,” I replied.  “Bad ice.”  Obviously I’d be doing really complicated moves like stopping with my skates instead of the wall if the teenagers driving the Zamboni had done a better job of resurfacing the ice.

When I mentioned the immanency of my trip to the Penn’s Landing ice rink to one of my co-workers last week she reminded me that she coaches figure skating and offered to teach me the basics.  I figured I could join her for an afternoon at the rink and attempt to add a few non-spastic moves to my repertoire… or I could just be totally lame and take advantage of the opportunity to be girly and let someone else be better than me at something.

Seeing as I totally wiped the floor with the Man from Marshalls when we went bowling and kicked Date #17’s butt in yoga, I was pleasantly surprised to find PSM#1 literally skating circles around me.  It was kind of nice.  And it was especially when he grabbed my hand and pulled me all the way across the rink because I greatly prefer winter sports that don’t require any actual effort on my part.

Despite the fact that I spent the majority of our date trying not to fall (and trying not disembowel previously-fallen preschoolers), I did remember that I had something I was supposed to tell PSM#1.

“I know,” he replied, zooming past me for the seventieth time.  “You told me halfway into your second mojito the other night.”

As for tonight’s potential crisis, my college roommate suggested I invite both of my eHarmony men to the party.  “We’ll keep them distracted,” she promised, “they’ll never meet!”  Much as I love a good intrigue, this seemed a bit too chick lit, even for me.  As it is, PSM#2’s decided to ring in the New Year in New York so I’ll be ridin’ solo this New Years Eve.  But rest assured: I’ve managed to schedule a rendezvous with PSM#1 on Saturday and another with PSM#2 on Sunday so 2011 will start off with a bang.

No, not that kind of bang 🙂

7 Responses to “Skating and Dating”