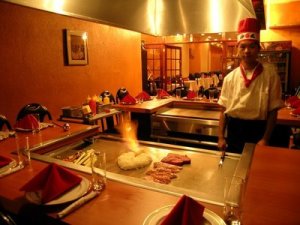 About halfway into our appetizers at Ikko Hibachi Restaurant on Christmas Day, my grandmother asks, “So Katrina, do you have any special men in your life?”  Because it’s Christmas, I decide to spare her the truth; she nearly had a heart attack three Easters ago when I informed her I was dating a Jew.

“Susie and Maggie are doing fine, thank you,” she says.

“No, Frisky was the dog,” she informs me.

“No, Maggie was the dog,” I counter.  I know this for a fact because I was there when she adopted the short-lived Maggie from the pound nearly eight years ago.

We then consult my grandfather who informs us that Maggie-the-cat is frisky, not called Frisky.

“Are you sure you didn’t change their names somewhere along the line?” I continue.

I’m not so sure.  I’m not the one who’s about to celebrate my 80th birthday and my mother and I are rather skeptical about these cats to begin with.  Neither of us has ever seen them, and although think I caught a glimpse of a tail once, I’m not entirely certain that it wasn’t a skunk.  Or maybe a raccoon.  For all I know, Susie and Maggie/Frisky are a pair of beavers, which is why they slip out of the collars whenever my grandfather takes them for a walk and try to escape.

(He’s solved this problem by building them a customized “trailer” that my mother has taken to calling the Cat-mobile.  It looks like the tiger cage from one of those old school circus trains, complete with a cat-proof skylight made from an old oven rack so that Susie and Maggie/Frisky can enjoy the view whilst being rolled down the block for their daily dose of fresh air.  Evidently Susie and Maggie/Frisky hate the Cat-mobile.  I can’t imagine why.)

The topic of cats thus exhausted, we turn to Christmas presents.  The majority of my brother’s gifts to everyone were technology-related this year so they require some translation into octogenarian-speak.

“Basically, you can get a movie delivered to your TV through your phone line,” he explains.  He is referring, of course, to the Netflix On-Demand subscription he purchased for my parents and me but given the look of absolute amazement on my grandmother’s face, you’d think he’d just invented a flying Cat-mobile.

By this time, the Hibachi man has finished his show, my brother has ceremoniously transferred all of his vegetables to my mother’s plate and my grandmother is doing a little dance that translates to, “Yes please, I would like ice cream for dessert” (which my mother then translates for our long-suffering waitress).  The men of the family then proceed to “split the bill.”

“Here we go,” I whisper to my mother.

For as long as I can remember, my grandfather has always offered to pay, my dad has always refused this offer and they spend the next five minutes pulling the bill back and forth until my dad comes up with the “genius” solution that he picks up the tab and my grandfather leaves the tip.  This is how is has always been and how it will always be (unless— God forbid— I ever get married and my husband decides to toss his hat into the ring) and yet we must go through the entire ritual every year until all parties are satisfied with the invariable outcome.

The evening concludes, as it always does, back at my grandparents’ house.  Because my grandfather is nearly 82 and not terribly fond of making left turns, we take a rather scenic route.  Because my brother is 23 (and rather enamored of his GPS), we’ve brought “Samantha” along for the ride.

“Recalculating…” Samantha says as we hang a right.

“Recalculating…” she says again as we pass the left hand turn that would have led us directly to my grandparent’s house.

By the time we finally arrive, she’s recalculated our route eight times.  Just when I think I’m about to lose my mind, I get a text from PSM#1: “I know we’re both tied up with family stuff today but I wanted to take quick sec to wish you a Merry Christmas!”

“Thanks,” I reply, “and the same to you!”  Then I help myself to a slice of cheesecake and wonder if I’ll ever meet a man who’s not completely horrified by the thought of matching pajamas and Hibachi on Christmas because crazy though it may seem, it’s one tradition that I’m not going to give up.