If I had to pick a favorite sport, I’d pick baseball.  You don’t have to run in baseball (at least not as much as you do in icky sports like football) and baseball players are way cuter than football players (American football players at least… there’s a reason why David Beckham is the face of Armani whereas Chase Utley fronts for Little Debbie snack cakes).  My favorite part of baseball, however, is this nifty little trick called the double header.  And if it’s good enough for the major leagues, it’s good enough for online dating. 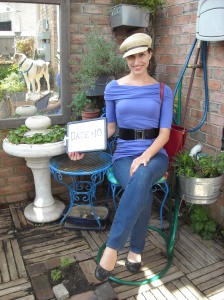 12:30 I get a text from Date #10 saying he’s going to be late for lunch and, not to be a Philistine or anything, but he’s not terribly keen on sushi so could we try someplace else instead?  I agree, both to the change in time and location, but I go a bit weak in the knees: I’ve scheduled a double header with Date #11 and I’m gchatting with Date #9 throughout the entire transaction.

1:30 I make my way to South Street to meet Date #10.  I don’t see him right away so I call his cell and— Christ on a cracker!—  I should have double checked his profile before coming out because the voice in my ear asking, “Is that you in the purple?” belongs to the super tall guy across the street.  I could have worn heels.

1:45 The waitress appears with two drinks.  Two drinks that we did not order.  “These are from a woman inside,” she informs us.  “She said you two looked like you were taking too long to read the menu and she wanted you to enjoy yourselves.”

1:47 The waitress returns with an appetizer.  An appetizer we did not order.  ““These are from the woman inside too,” she explains.  “She wanted you to try our jalapeño cheese fries.”

Can I just say that this sort of thing never happens to me?  I’ve had the occasional stranger ask to buy me a drink but I’ve never had a woman send over two cocktail shakers of margaritas and jalapeño cheese fries.  I don’t know what to do.  This is why I liked going out with Date #4; Date #4 would have known what to do but Date #10 isn’t quite as suave so from 1:47 until 3:30, we just sit their speculating about the origin of our free drinks.

“Maybe she thinks we’re both cute.”

Unfortunately, this is the high point of our conversation.  Date #10 has a devastatingly gorgeous smile, especially when he laughs (which is a lot because we have absolutely nothing in common so I’m pulling out as many funny stories as I can), but he doesn’t like Jomar’s.  I simply cannot be with a man who doesn’t appreciate the ghetto-fabulousness of Philadelphia’s greatest bargain basement.

3:45 We say our goodbyes and I head home to get ready for Date #11.  My intent is to spend the afternoon writing but the margaritas have left me a bit worse for the wear.  (I forgot to mention that these were Copa Cabana margaritas of Monday Margarita Madness fame—or infamy, rather, depending on how you look at the situation.)  When I get back to Casa Richter, my mom asks if I’d mind popping over to the deli to pick up some prosciutto for a cocktail party she and my dad are hosting later that evening.  Given that I’m too wasted to write, I say yes.

4:00 I walk to the deli.  I order prosciutto.  The deli guy gives me a fresh baguette, free of charge.  Today must be my lucky day.

6:30 I hit the shower, re-do my hair and decide to double check Date #11’s profile before selecting my footwear for the evening.  While I’m scrolling through his stats, it occurs to me that I should probably double check his entire listing because I cannot, for the life of me, recall what he does for a living.  It is then that I discover he’s a republican.

I have never dated a republican.  At least I have never knowingly dated a republican.  It’s not that I dislike republicans, it’s just that I’m not terribly fond of what happens when a bunch of them get together and manage to convince the American public that healthcare reform is just a step away from communism or that burning the Koran is an appropriate way to commemorate 9/11.  I hope that Date #10 doesn’t share these sentiments because if he does, he’s in for a smack down.

7:00 I paw through my wardrobe looking for an appropriately liberal, stick-it-to-the-man sort of outfit but I’m too tired to go pulling out all of my CodePink gear.  I think about wearing my peace sign earrings but then I remember this is a date; we’re just going for coffee, not an ideological confrontation.

7:15 I head up to the roof deck to eat prosciutto and am in the middle of updating a family friend about the Date #4 situation when a new neighbor starts giving me funny looks.  “I’m dating,” I explain.  “A lot.”

7:45 I make my way to the Starbucks on Market Street.  Date #11 calls and says, “So this is a bit embarrassing but I can’t find the coffee shop.”  I roll my eyes; meeting here of all places was his idea.  “It’s in the lobby of the Marriot,” I inform him.  Honestly.  Do major league baseball players have to stop and give directions when they’re playing a double header?

8:05 Date #11 finally arrives and after giving him a quick once over, I decide that I was right to wear flats this time.  We order Pumpkin Spice Lattes (yay for the new fall lineup at Starbucks!) and crack each other up for the next hour and a half.

“You know, Cinderella?  The carriage turns back into a pumpkin after midnight?”

“Oh!  Right.  But we ordered pumpkin lattes.  I thought you were trying to trip me up with a pumpkin latte reference.”

No, not quite Date #11.  I thoroughly enjoyed our verbal sparring match—he was every bit as funny in person as he was in his profile, and I would definitely like to hang out with him again—but I can’t quite get over the fact that he’s going to London next month and his only plan for his first trip to Europe is to see the San Francisco 49ers play the Denver Broncos at Wembley Stadium.

With all of the museums, the theatres, the shopping, this history— the culture— you’re going see a football game?  An American football game?  He was appropriately self deprecating about it (“I know, I know.”) and promised to keep his Oyster card in hand upon exiting the tube, so as not to be one of those stupid tourists responsible for the perpetual traffic jams at Hammersmith, but still.  I don’t like football.  I like baseball and I like the double header, even if I struck out twice this time around.