There is something wrong. I know we were supposed to be at the patio for breakfast by 7:00am, and I know I’m at the right patio because there is a woman in a long ruffled skirt setting up eight coffee mugs and napkins on a bright blue table. True, I am 12 minutes late because I decided to put on a bit of proper makeup and take a shower (neither of which I was planning to do when I set my alarm) but the bus wouldn’t, you know, leave without me, would it?

I tell myself that abandoning a member of the press in Suchitoto would reflect pretty negatively on the El Salvador tourism board, and seeing as the entire point of flying us all down here was to cultivate good press, they wouldn’t leave without doing a headcount.

Plus, I’m learning that when you put a bunch of journalists together, it’s basically the same thing as putting a bunch of dancers together. Or homeschoolers. “7:00am at the patio” means “7:15 or even 7:30” and because we all have to photograph each and every dish as it is served, it take us approximately seven hours to get through a single meal. Not twelve minutes. In fact, there is no possible way that my entire group ordered, photographed and ate their food while I was in the shower. 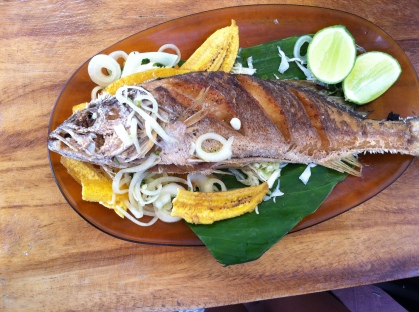 But still. The tourist police assigned to our van are nowhere to found. Nor are the tour guides, or the bus driver. In fact, the entire hacienda-turned-hotel (which was one of the first built in the colonial town of Suchitoto) seems to be abandoned.

In some ways, though, this is nice. I get to watch the mist rising above the lake all by myself. And just across the lake (which is actually a dam that was built to harness the Lepa river and provide power to the region) are the mountains of Honduras. There is bachata music playing in the background and the smell of fresh coffee brewing and I’m feeling so… El Salvadorian (after an entire 36 hours in the country) that I sit down on the steps with my notebook and write a little poem.

If the tour group has left me, at least I’ve been abandoned in a beautiful place. And the lady who ran the indigo workshop just down the block seemed to like me. I could just go find her shop, knock on the door and, you know, figure something out…

I check my phone and realize that an entire hour has gone by since I first stepped out onto the patio, and yet somehow it is still 7:00am. Or is it 7:00am again because I’m switching time zones, bouncing in and out of Wi-Fi range and my phone hasn’t quite caught up?

Finally I decide to ask a waiter for the time. Turns out I’m not 12 minutes late for our 7:00am breakfast but rather 48 minutes early.

Moral of the story?

Don’t use your cell phone to wake you up.  Use the hotel’s alarm clock. And if your hotel doesn’t have an alarm clock, bear in mind that when you have two tourist police, two tour guides, two photographers and a driver, you’re not going to get left behind.  So just chill the hell out and enjoy the view. 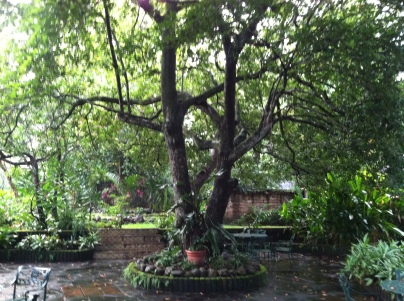