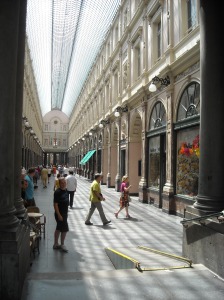 It’s nearly five o’clock in the Galeries Royales de St. Hubert, just a block from Brussels’ Grand Place.  Highly fashionable traveler that I am (having been reunited with the contents of my suitcase) I’ve taken a slight detour to explore a shop on the corner—a shop which boasts a new “Summer Collection 2010.”

And what a Summer Collection it is: for starters, the entire shop is framed by an arcade of Doric columns: tall and gray, they mean business.  Surrounding the door are a series of marble pilasters, in three different colors, which would be more than enough to send me off into a fit of architectural ecstasy even without the gold leaf and glass paneled ceiling.

Given the excessive trimmings, I’m nearly hyperventilating by the time I pull out my camera, and the contents of the Summer Collection 2010 are like nothing I’ve ever seen: rich chocolately browns, bright and summery “sorbet” hues in pomegranate and raspberry, a limited edition “fusion” of strawberry and banana and finally a delicate array of pearls in white, milk and dark “chocolate.”

I decide to treat myself to a little something.  A girl who manages to get on and off the bus at the right stops deserves a little something.  Not only that but I also located the tourist information office just minutes after arriving in downtown Brussels (the real one this time) and spent the afternoon dutifully reading the English gallery guides at the Musée de La Ville de Bruxelles.

I even tried my hand at a bit of guerilla journalism: taking photographs in an exhibit where they were expressly forbidden, which qualifies me as something of a revolutionary as far as I’m concerned.  This caused the historic preservationist in me to have a small personality crisis and caused the guard to come tumbling after me, hissing, “I see you take your camera!  No pictures!  No pictures!”

I’m not sure how she knew to reprimand me in English, or how she saw me take my camera out of my bag—I was being discreet— but the humiliation was enough to ensure that I won’t be doing that again.

Instead, I asked a guard—a different guard—where I might find the subject of the exhibition.

I have since learned that “mannequins” and the “Manneqen-Pis” are two very different things.  Precisely, the Manneqen-Pis is a statue of a naked boy taking a piss.  He is a symbol of freedom according to the mayor of Brussels (which is why perhaps Belgium has been free for less than two centuries; the Belgians, I think, would be better served by a cracked bell enshrined in bullet proof glass or a statue carrying a torch and calling the “tired,” the “poor” and all those “huddled masses yearning to breathe free” to her shores, provided of course that they don’t look like foreigners).

The Manneqen-Pis, I learned, lies a few blocks from the Grand Place.  I decided that since I couldn’t take a picture of the many replica Manneqen-Pis in the exhibition that I had better go take a look at the real thing, but first: a little something from the Summer Collection 2010.

After much deliberation, I selected a scoop of Belgian chocolate, a dallop of limited edition pomegranate sorbet and a spoonful of the aforementioned chocolate pearls.  Häagen Dazs Brussels is a beautiful thing.