After a weekend of Quaker shenanigans and an evening at the London Tap Jam, I’ve arrived in France.  My suitcase, unfortunately, has not.

The good thing about losing your luggage somewhere between London and Lyon is that it gives you a great excuse to go shopping.  The bad thing is that Lyon, being a French city, second only to Paris in terms of economic importance and second to none in terms of it’s centuries-old textile industry, has little interest in selling normal underwear. 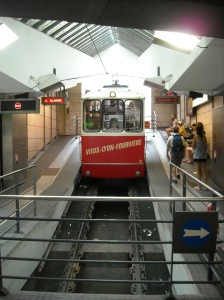 Strolling through the Presqu’ile (which translates to ‘almost island’ and comprises the heart of central Lyon), I found lingerie shops of every possible variety.  Ditto designer shops selling men’s boxer shorts printed with retro cartoons and football clubs (France, you see, still has a shot at the world World Cup).  But I could not, for the life of me, find anything resembling normal underwear.

My quest took me to Vieux Lyon (Old Lyon) and Fourviere Hill where I managed to acquire two Essentials in Life: a toothbrush and a ticket for the Fourviere Furniculaire.  I had been warned, by numerous individuals, against taking the Furniculaire; it would seem that the the 90-second journey to the Basilique Notre-Dame de Fourviere holds little appeal for natives of Lyon, but being a dutiful little travel writer, I fed my Euros into the ticket machine and charged through the turnstile.

They—the natives of Lyon—were right.  It’s not that exciting.  To be honest, I could have done without the Basilique and the nearby Theatre Romain too (not to be all blase about UNESCO Heritage Sites but I’m going to assume that Lyon’s ampitheatre has much more to offer when there’s an actual performance taking place).  Upon returning to the river, however, to begin my trek back through Presqu’ile, I discovered a Great Essential Truth about living in Lyon.

No wonder French women are so thin.  It has nothing to with what or how they eat but rather the fact that Lyon was built by the Celts, and then the Romans and that neither of these were known for being terribly peaceful peoples.  Lyon is a city poised for defence (and played an integral part in the French resistance during WWII, thanks to the secret traboules or passageways that also facilitated Europe’s first organized worker’s revolt in the 1830s).  Lyon is a city built between two rivers and it’s killer-hills (small mountains, really, urban mountains) rival those of San Francisco.

I would have been okay if I had been wearing my Comfortable Walking Shoes but on account of having slept the night before in the bowls of Gatwick International Airport, I was wearing my Warm But Not So Comfortable Shoes and had therefore, elected to borrow a pair of my hostess’s flip flops.

I had also elected to borrow her LBD (Little Black Dress, as the jeans I arrived in were, admittedly, woefully inadequate for cosmopolitan France).  As such, I was feeling very European, so European, in fact, that I decided to buy a bottle of wine to go with dinner.  Unfortunately, I failed to consider the sheer impossibility of transporting said wine and the necessary accoutrements back to my friend’s flat (which lies, rather inconveniently) at the top of said urban mountain.  Her LBD, while allowing me to feel French, did not endow me with the ability to speak French and so, I decided it would be easier to walk than to try to purchase a bus ticket.
I was wrong.  As a result of my decision, however, I now know why French women are so damn thin (and I discovered, in the process of hauling a bottle of wine, a cucumber, four tomatoes and six eggs up approximately eighty million steps that you can indeed purchase normal underwear in France’s textile capital).

5 Responses to “London, Lyon and Lingerie”